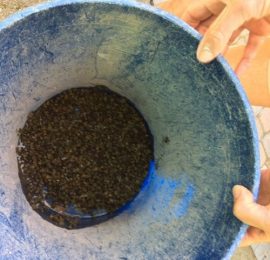 A local neighborhood in Spokane, WA is usually flush with bees, but something disturbing has been happening lately that has residents very concerned. The familiar buzz in the air is no longer there and rather than seeing bees flying all over Corbin Park, residents are instead finding dead honey bee carcasses littering the ground. While some locals thought this was a “one-off” instance, they are realizing that this is a problem happening throughout the area.

One local, who is described as a “backyard beekeeper,” first noticed the problem when she saw dead bees outside her hives. This was not just a few dozen, which would still be disturbing, but understandable. Instead, she saw thousands of dead bees. After speaking to other beekeepers, she realized she was not alone, as other beekeepers were all having the same problem.

Teresa McGee, one of the beekeepers, stated, “The whole bottom board was so covered with bees, the bees that were inside couldn’t even get out the bottom. There had to be at least two thousand bees dead.” Another local beekeeper, Emmilee Bolan, stated, “Everything that they do is amazing, I mean, I don’t even know how to explain some of it.”

What is Happening to the Honey Bees?

Typically, when bees are sick, dying, or dead within a hive, other bees will remove the bee from the hive so it does not infect the rest of the hive. This process can create more of a problem for the hive sometimes in that the bees removing the infected bees contact the same disease or illness the sick bees have. If this was the case here, we do not know, but the fact so many bees were found just outside the hives would make it a very strong possibility.

When McGee checked her hive, bees were having a problem getting in and out because of the large number of casualties still in the hive. She stated, “The whole bottom board was so covered with bees, the bees that were inside couldn’t even get out the bottom. There had to be at least two thousand bees dead.”

McGee believes the bees found a food source that had been sprayed with a pesticide that is harmful to the bees, which is why so many of them are dying off so quickly. She stated, “These bees went out and found a food source and came back and did their little wiggle dance and told the others where the food source was and so they all went to that bad place.” If this is the case, hopefully, these local beekeepers are able to isolate the source and report it to the local bee population does not continue to die off.