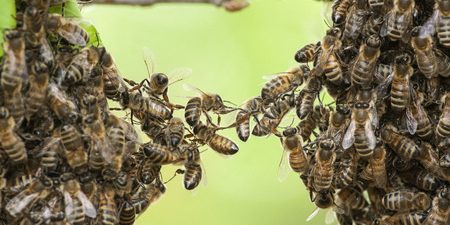 According to a 2015-16 U.S. Agriculture Department-funded survey, beekeepers in the United States lost a recorded 44 percent of their honeybee colonies, with many placing the blame on the phenomenon known as colony collapse disorder (CCD), itself likely caused by other factors—pesticides, habitat loss, pathogens, parasites, or malnutrition. CCD, which results when almost all of a hive’s worker bees suddenly disappear, threatens agriculture on global levels, but a new paper, published in the past few weeks by Proceedings of the National Academy of Sciences, may offer some insights into the strange enigma.

This paper details a new method for predicting “tipping points,” or moments when sudden change takes place in complex network systems. The researchers, hailing from universities in the U.K., the U.S., and China, used 59 plant-pollinator interaction networks from various continents and climate zones as model systems, and they formed two-dimensional models to accurately predict when tipping points occur in every network system. Tipping points in plant-pollinator networks are when the pollinating populations (plants and bees) decrease zero.

The networked systems vary from climates and ecosystems to social, infrastructure, and economic systems. A tipping point, or “phase change,” occurs when a system’s components start interacting differently, manifesting as sudden shifts in systemwide behavior. Examples of a tipping point include when water reaches its boiling temperature or when substances melt from solid to liquid forms.

“A tipping point is the critical value of a certain parameter, such as the number of removed bee species or the death rate of the bee species, at which the populations of all bee and plant species decrease abruptly to near zero values,” says Ying Cheng Lai, the study’s lead author and an Arizona State University professor of energy, electrical, and computer engineering. “The simultaneous collapse of all bee and plant populations occurs because they are mutually connected and interact with each other in a highly non-linear fashion.”

When tipping points are projected, control strategies may be created to either delay or prevent them from happening. “For example, we can focus on a particular bee species and protect its abundance by introducing more bees to maintain the population at a steady level,” Lai said. “Or we can make policies to eliminate the use of certain pesticides that are harmful for this species of bees.”

The model produced in this study can act as a standard for predicting and understanding the dynamics of tipping points when safeguarding pollinators. “The occurrence of a tipping point is of grave concern as it may lead to a sudden and total collapse of the system,” Lai said. “To predict the tipping point and understand the responsible dynamical processes are essential to formulating effective control strategies to delay or even prevent it from occurring. This will be of significant value to protecting and sustaining complex systems that are of critical importance to the modern society and human lives.”