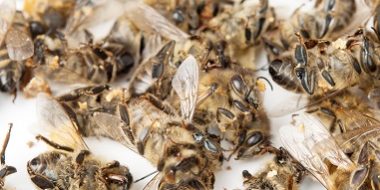 Recently, North Island in New Zealand had hundreds of beehives wiped out. Now, local authorities believe they know what the culprit of the mass deaths was. Local reports have stated that chemicals using during maize crop planting were more than likely the culprit. With many businesses on the line, local beekeepers want answers and they want them now.

One local beekeeper, Neil Mossop, may now be out of business. His family has been selling honey for more than seven decades, but it could all be coming to an end now. Mossop lost nearly 200 hives, which accounts for more than 6,000,000 bees being lost. He stated, “There was just a mat of dead bees.”

At first, he thought someone possibly killed the bees, but he later realized this was not the case. He stated, “The beehives were close to maize paddocks and then we thought, well, they may have sprayed something.” As it turns out, his hunch was probably right. Traces of neonicotinoid insecticides were found in the area. As you probably already know, neonicotinoids are at the heart of what most bee advocates believe are killing our honey bee populations.

Dr. Chris Pook stated, “It was remarkable that every site that we just happened to grab a soil sample from turned out to have some really high concentrations of these residues in.” He further added, “If you’re seeing [the] transferring of these residues to wildflowers, to flowering weeds that are foraged on by pollinators and by honey bees, then you’re going to see a potentially significant increase in exposure to those insecticides.”

It is rather amazing these products are still being used in New Zealand, the major producer of Manuka honey. The value of this honey is far more valuable than our domestic honey and the loss of this amount of hives will be disastrous to the industry. Already pricey, this could dramatically increase the cost of Manuka honey, driving the price upwards of $100 per pint if this loss continues. These pesticides have been outlawed in the EU for good reason, so expect some tightening of the regulations in both New Zealand and Australia very soon.

Mossop has put his existing hives into winter hibernation to prevent further loss, but some beekeepers are not so lucky and continue to try to work through this problem. Mossop stated, “We are very disappointed and very concerned because we don’t know, there seems to be very poor regulations about it.”