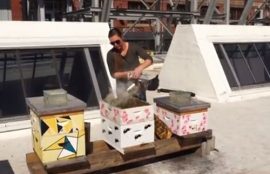 We all know the plight of the honey bee by now, but what is encouraging about it is the fact we are seeing more and more involvement in local communities to help the honey bee get through its current ordeal. As part of that effort, various cities in North Carolina are working hard to complete Bee Downtown, which is expected to be open on September 9.

Bee Downtown will obviously not be your typical downtown setting. This project will connect 60 miles of healthy pollinated space throughout North Carolina for honey bees to patrol. The corridor will stretch from Durham, through Raleigh, and into Garner, North Carolina. In order to bring this project to fruition, dozens of local companies cooperated, with more than 150 hives operating in the area containing more than nine million honey bees.

Leigh-Kathryn Bonner, the Founder and CEO of Bee Downtown, stated, “North Carolina is about to become home to the longest strategically connected healthy honeybee corridor in the country. MetLife’s Cary campus was our missing link in the final connection point between The Research Triangle Park and Raleigh and we are thrilled to have them join the Bee Team. The Triangle’s corporate commitment to the environment, agriculture, and creating a great place for employees to work is truly inspiring and we are proud to call North Carolina home.”

Projects such as this will go a long way to helping local beekeepers recover from the extremely bad winter they just had. While the national average for losses was estimated at almost 41 percent, which is about three percent over the normal loss, some areas were reporting 60-90 percent losses due to an extremely cold and longer-lasting winter. Some businesses were put out of business entirely due to the mass loss of hives.

Since bees are responsible for pollinating 70 percent of the top food crops in the world, we simply cannot afford to have bees go extinct. It is for that very reason so much pressure is being put on Washington to rescind the loosened regulations on pesticides as well as resuming the bee surveys. Senator Chuck Schumer recently took the case during an appearance in upstate New York, but his speech now appears to have been more of a publicity stunt than actual planned action, because we have seen absolutely no movement on this front at all and more specifically, Schumer has failed to act on his promise to ensure the surveys took place this year.