NYPD Working to Help Save the Honey Bee 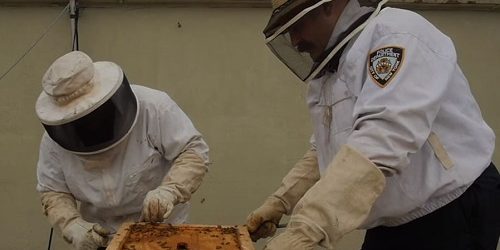 While other cities have to wait on private beekeepers, New York City police officers actually have a group of officers that also answer infestation calls. Be it a beehive in a tree or bees in the walls, these officers will show up and rescue the bees rather than exterminate them. So, who are these men that have not only sworn to protect and serve the people of New York City as well as New York’s bee population?

Meet officers Darren Mays and Michael Lauriano. Officer Anthony “Tony Bees” Planakis was actually the original beekeeper for the NYPD. His nickname pretty much tells you everything you need to know about him. While he was on the NYPD, he was the de facto beekeeper of the NYPD. After he retired, the baton had to be passed on. In stepped Mays and Lauriano to take over the tradition.

Since beekeeping became legal in New York City, the city has had problems with swarms. One of the more famous incidents where the NYPD beekeepers had to step in was when a swarm landed on the umbrella of a hotdog cart. Lauriano showed up in full beekeeper gear with some special gear to remove the bees. Little did he know he would have an audience of dozens of people, including the media.

With the recent attention honey bees are getting, Mays and Lauriano are enjoying Rockstar status in the beekeeping community. Now that New York Senator Chuck Schumer has stepped in to fight the government’s decision to drop the bee surveys, Mays and Lauriano are showing up in a lot more in Google searches, and they are starting to become a household name, at least in New York City.

In addition to everything mentioned above, Lauriano and Mays also happen to be members of a group co-founded by Noah Wilson-Rich, called The Best Bees Company. It is a national grassroots movement that has vowed to pick up where the government leaves off if they do in fact stand by the decision to cut these surveys.

The job these men are doing should serve to be an example for every big city and every community in the country. The fact is the bee industry is facing a challenge as we have never seen before. Beekeepers throughout the country and around the world are reporting unprecedented losses to hives. It is almost a perfect storm of pesticides, mites, inexperience, and weather that are creating a steady decline in bee populations.