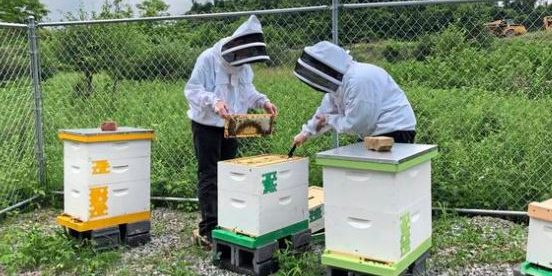 You know how excited we get when the next generation is positively introduced into the world of honey bees. That being said, Thomas Jefferson High School in Pennsylvania will have something very new and interesting for its students. The high school just announced it will be adding a new apiary that will feature about 60,000 honey bees in a total of four hives.

Educating the Next Generation

Because of the plight of our favorite pollinator, it is imperative children today learn the honey bee is something they need to embrace rather than fear. We need to learn how to preserve these creatures rather than harm them, which is the usual reaction when people see bees. Learning how to properly care for bees will surely make students less likely to swat at them or worse, go for a can of pesticide, when they see bees flying around.

The school seems just about as excited as we are about the new venture. Thomas Jefferson High School teacher Dan Giger stated, “We’re in a prime time right now that we can do some amazing environmental-based things here. There’s a lot of education that we can push out to kids and this is just the start of it.”

The idea of introducing beekeeping at the school is not a new one. In 2015, Giger had actually brought up the subject. The idea was revisited when a new school administrator was interviewing for a position. As it turns out, Laurie Woodward, who was interviewing for a position as the Secretary of Special Education in the West Jefferson High School District, she told her interviewers both she and her son had a hobby of beekeeping.

Woodward seemed excited about the idea of introducing a program to the school. Since she was new to beekeeping, she asked school officials for some time to work at it to ensure she could actually do what they were proposing to her. A year later, the subject was revisited and now the school has its own apiary. Superintendent Michael Ghilani stated, “I appreciate her initiative. The great thing about bees is that they’re so important to our environment and our ecosystem. What better way to promote our environment and ecosystem than this?”

Woodward’s son Liam is a great example of why educating our youth on this specific topic is so important. He has clearly taken to beekeeping and is very excited about the project, stating, “They’re not aggressive at all. The only time they sting without you really doing anything is if you stand in front of their hive and just stand there.” He added, “I’ve learned a lot about how bees work. I didn’t realize how interesting and complicated they were.”

We wish everyone involved in the project the best of luck and we hope to hear more great things about this new apiary for years to come!