‘Razorbees’ Given a New Home 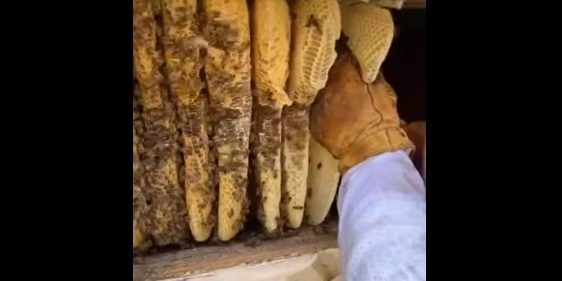 If you go to the University of Arkansas, you are considered a razorback. So, what do you call bees that have taken up residence in one of the most historic buildings on campus? Well, they would have to be razorbees, right?

Last weekend, after a massive hive was discovered in the Old Main building on the main campus, it was decided to rescue and move the bees so passersby would not be injured. This was not necessitated by a sudden rash of injuries, but more of a preventive measure taken by the school to ensure nothing bad did happen, even though some students seemed to be quite fond of the bees. Caleb Hutcherson, a student at U of A, stated, “I don’t believe they would have harmed anyone.”

As it turns out, Hutcherson was the beekeeper tasked with removing the massive hive from the building. The bees had turned a portion of a soffit as their new home. When Hutcherson opened up the area, there were massive layers of honeycombs visible (click here to see the removal). As he cut away from the honeycombs, the bees were then vacuumed safely into a holding container as they awaited transport to their new home.

Hutcherson’s family owns and operates a local farm about 12 miles from campus, which is where the bees were taken. The farm, Pick and Peck Farms, is located in Prairie Grove and doubles as the base for Hutcherson’s beekeeping business. He stated that he has seen larger hives, but none of them had produced the amount of honey this hive had amassed. He stated, “It was just huge, massive chunks of honeycomb.”

One thing Hutcherson noted when he was removing the hive was that while there was a queen bee cell within the hive, the queen was no longer present. In all likelihood, this means the former residents of the hive had already left and were swarming to find a new home. So, why did the honey bees pick this particular spot? Hutcherson applauded their ingenuity, saying the bees had picked the perfect spot on campus to settle in.

That particular area was both protected and loaded with ample food sources for the bees. Hutcherson stated, “There are so much clover at the U of A grounds and Old Main, so much nectar, so much for them to provide for their nest. So pretty much they found a wonderful area.” This is far from the first time honey bees have had to be removed from Old Main, with the last removal happening a little more than a decade ago during renovation efforts. We expect in another decade or so, some lucky agriculture student will have the pleasure of discovering yet another hive at Old Main.