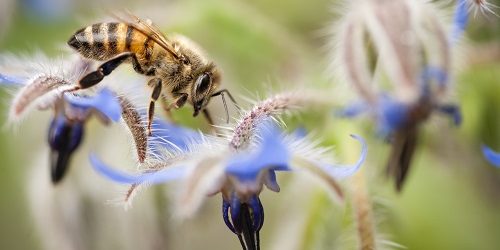 Come spring, honey bees have a job to do and according to a new report, they are not going to let smaller bees stand in their way. For all the threats honey bees face today, I guess it is only natural they would look to take out their frustrations when they know they can’t lose. A new study by Acta Oecologia shows that honey bees rule the block, er, the flower.

In many cases, managed honey bees are brought in to pollinate crops. Some farmers keep their hives while others rely on professional beekeepers to provide honey bees when their crops come into season. In no crop do we see this more than with almond growers in California, who often have to hire bees from all over the country to ensure they have a good season.

The new study wanted to find out if bringing in the managed bees had any type of impact on the native wild bees in the area. If mass quantities of bees are being brought in specifically to pollinate crops, exactly what was left over the native bees in the area? According to the study, if the native bees are smaller than the honey bees, they are often relegated to the leftovers because the larger honey bees will move them right off their spot to get to the nectar.

In the study, they specifically looked and cornflowers. As it turns out, cornflowers are one of the crops that have other areas of the flower that have some goodies on them. This flower has what is called extrafloral nectaries. On the cornflower, the plant excretes droplets of the nectary that fall in areas of the plant below the flowerhead. It is far from the nectar of the flowerhead area, but it still makes for a nice snack for our pollinator friends.

So, as they suspected, the honey bee is just a bit of a bully when it comes to pollinating crops and flowers.