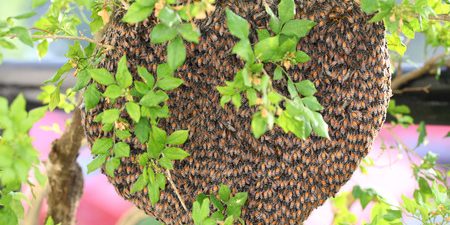 Given how vulnerable honeybees are these days, with their numbers declining for more than one complex reason, it’s imperative that researchers discover what they can to avert any risks of extinction. As pollinators, honeybees, native bee species, and all kinds of other animals are responsible for at least one third of the food we all consume, translating to crops valued at $15 billion, so the loss of one of those pollinators would put a serious dent in our ability to survive. That is why the news of two scientists receiving further funding to study and learn about a factor in bee decline is so important in the fight against honeybee extinction.

In Baton Rouge, Louisiana, two researchers from Louisiana State University are now confirmed to be receiving almost $1 million to conduct a study for the next two years of how stress and mite treatment can affect bee health. The researchers, Daniel Swale and Kristen Healy, will be coordinating with researchers from the U.S. Agriculture Department out of Baton Rouge as well as a beekeeper with one of the largest apiary operations in the United States, Adee Honey Farms in Bruce, South Dakota.

This team will study 400 bee hives that Adee Honey Farms owns, including a few that will be moved out to California during almond season in the fall and then out to Mississippi during the winter season. As per Healy, the team plans to sample nectar, pollen, and the honey bees from the hives at the very end and in the midst of the study. “We can look at which colonies failed and which ones didn’t and quantify which stress variables were more important to the relative health of the bees,” Healy explained. LSU will specifically receive $935,000 from the Department of Agriculture, and it is amid seven universities receiving a total $6.8 million to study pollinating species.

Healy will establish how honeybees being treated by a product for mite control compare with untreated honeybees. Swale will see if the moves cause the bees to expend more energy and reduce fat storage — as well as if there is a method for boosting that fat storage. The researchers are also interested in how viruses that cause bees’ wings to deform are spread. The USDA grant will also include an extension factor, so the researching team can identify the best ways for getting information on honeybee health to the public and especially to U.S. beekeepers.