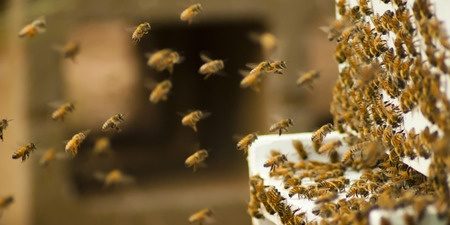 As many are probably aware, pesticides, specifically the commonly used class called neonicotinoids, have been named as a likely primary cause of the noted decline of honeybee populations throughout various parts of the world. While some countries have begun making efforts to limit the use of neonicotinoids, with some even outright seeking to ban their sale and distribution, it’s clear there is still far to go regarding the clearing of these pesticides from the board. Contributing to that fact even more is the publication of a study several weeks ago, featuring a sampling of honeys from all over the world and new evidence of why many bee species have been dying off.

This study, published by the journal Science and rightly called “A worldwide survey of neonicotinoids in honey,” found a substantial amount of honey from around the world contained hints of neonicotinoid pesticides at strong enough levels to cause honeybees brain damage. The chemicals intended to attack pests’ nervous systems and prevent them from eating crops also appear to be hurting honeybees along with native bee species, whose numbers, like honeybees, have been declining vastly in the last few years, much to the bewilderment of scientists in various countries.

The researchers for this study analyzed 198 samples of honey from various worldwide locations, testing them all for five of the more common neonicotinoids—thiamethoxam, thiacloprid, imidacloprid, clothianidin, and acetamiprid. They discovered at least one neonicotinoid was in about 75 percent of the honey samples, with 34 percent containing a compound concentration that is known for being lethal to honeybees. “The contamination confirms the inundation of bees and their environments with these pesticides, despite some recent efforts to decrease their use,” writes the study’s authors.

On the heels of this discovery are the years scientists have spent trying to discover what exactly is causing bee populations to plummet. Everything from car exhaust, malnutrition, stress, habitat loss, to, of course, pesticides among other possibilities have been considered. Agriculture in the United States is estimated to produce roughly $15 billion annually in crops, and it speaks to the importance of honeybees by saying they and other pollinators are essential for survival. Hopefully, such finds as this study can help ensure the bees—and the world—have a better future.