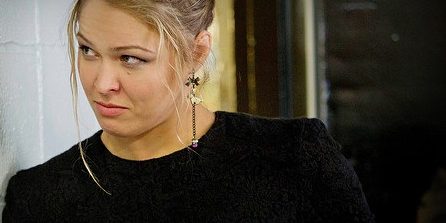 It’s a strange fascination, but there is something exhilarating and fun about taking a peek inside the bag or purse that someone carries around, whether it’s your best friend, a classmate, a celebrity, or even just yourself. Ronda Rousey, the famed UFC fighter, WWE wrestler, former Olympic bronze winner, and now film actress, recently participated in such an activity via Us magazine, specifically regarding her Henri Bendel backpack.

With this exclusive look, Rousey, 31, revealed that even seemingly indestructible wrestlers are cautious of their surroundings whenever out and about—or simply outside the ring. Per Rousey, who is married to Travis Browne, a fellow UFC star, “My husband gave me a defense flashlight from an infomercial and two defense pens. It’s so sweet he wants me to be safe.” If you’re curious about what else Rousey keeps on hand, check out the complete list below.

Per Rousey, she still has the ring case that carried the engagement ring presented to her by Browne, adding, “I actually broke my ring when I was at a match cheering on a friend!” Additionally, Rousey has a silicone ring that she wears whenever she can’t safely wear her wedding band, including when she’s wrestling. “I wear the white [ring], and my husband has the black.” She also has the lone survivor of a pair of dangling pearl earrings from her wedding day, with the reasons for the loss being, “I had a really fun wedding.”

As for the few keepsakes she carries around in her bag, Rousey has “a note from Shayna Baszler—she’s the WWE NXT champion. We’ve been friends for years.” She also has the tooth of a bull shark “from when I did [Discovery’s] Uncaged special for Shark Week that I keep in my wallet.” Speaking of wallets, Rousey has reportedly had the same type of wallet for the past 12 years. Fans of Pulp Fiction will know exactly what it says, as she has the same one as Samuel Jackson had at the diner.

As for the rest of Rousey’s backpack belongings, there are plenty of them, starting with the iPhone X, her charger for it, as well as Have a Nice Day: A Tale of Blood and Sweatsocks from author Mick Foley. The rest of the contents are far too many to mention, but the Manuka honey lozenges definitely caught our eye!

Ready to try some Manuka honey lozenges? Did you know ManukaHoneyUSA.com offers them in several flavors? To learn more about this product or to order some for yourself, click here.

Photo Courtesy of Darrell A. via Creative Commons License