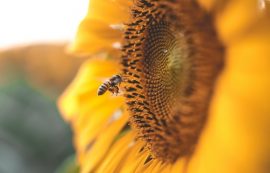 Bee Vectoring Technologies is probably a company you have never heard of before today. Trust me, you are not alone if that is the case. The Canadian-based company trades for less than $.25/share, but that may change rather quickly as news of this new pesticide gets out and if the project is successful, stockholders may become instant millionaires.

Using bees to transport fungicide is not exactly an easy undertaking. Scientists are challenged by creating a product that will not harm the bees as well as being something that bees will not avoid coming out of the hive. After years of trial and error, though, Bee Vectoring Technologies has finally come up with a product it believes will deliver on all fronts. Stockholders were excited to learn the EPA had finally given its approval for a product called Vectorite.

Vectorite is a white powder that will be placed in trays at the exit of the hive. It carries Clonostachys rosea in a refined form. This is a type of fungus that feeds on a variety of fungi that can damage crops. BVT CEO Ashish Malik stated, “This is the first bee-vectored product that the EPA has approved, so what we have really done is created a new category.”

Use of the fungicide has already proven to be very productive in tests. For instance, in Florida, strawberry yields were improved by at least 10 percent while the gray mold that sometimes appears on the fruit was decreased. Similar results were achieved in Georgia where the fungicide was tested on blueberry patches. Other crops where BVT sees Vectorite being helpful is with sunflowers and almond crops.

This solution may prove to be far more beneficial and less costly for farmers using pesticides to address these issues. Honey bees visit plants just as they are blooming, which is the ideal time to deliver the “payload.” When farmers are spraying, they usually have to spray multiple times and are still not guaranteed to fully “soak” the intended area. Many farmers already use honey bees from commercial hive owners for pollination, so the system is largely in place for delivery already. All they have to do is add the trays of the fungicide.

Something else that may be very attractive to farmers is this process could save them significant money in pesticide use. The company estimates it could cut costs by as much as 75 percent using BVT products and technologies, which should lure in both organic and conventional farmers. Malik stated, “The beautiful part about our system is that you can deliver multiple microbes through that one flight the bees make, provided the microbes are safe to the bee.”