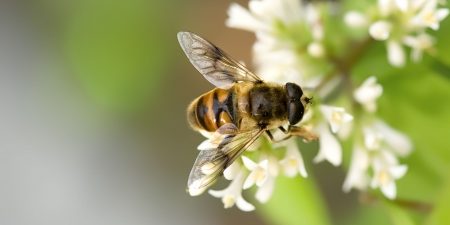 In addition to our managed honey bee hives, we also have to be concerned about the wild bee and pollinator population in our country and around the world. There is just as much danger for them as there are in our managed hives. We can actually learn a lot from wild hives, however, as they often exist in areas and pollinate around flowers and plants that managed hives will never come in contact with. That being the case, some flowers they come in contact with could be beneficial to both wild and managed pollinators.

This would appear to be the case with heather. A new study from the UK discovered a natural “bumblebee medicine” in the wild that can help protect the bee population against a very harmful parasite called Calluna Vulgaris. Heather is something that used to grow in abundance throughout the UK, but that is no longer the case. As such, the wild bee population is suffering.

Dr. Huake Koch, who is the co-researcher conducting the study, stated, “Just like us, pollinators can catch diseases that make them sick. Bees also face additional pressures from habitat destruction, pesticides, and climate change. While beekeepers can often help sick colonies of domesticated honeybees by, for example, directly treating against parasites, we can’t help wild bees against disease threats in the same way. Our discovery shows, however, that a good way to help pollinators in the wild may be protecting key medicinal plants for them.”

The study has shown that heather may be more helpful to the pollinator population than experts previously believed. He stated, “Our work shows that heathlands may be even more valuable than previously thought by providing wild bumblebees with a natural medicinal nectar as protection against a major parasite.” Professor Mark Brown further added, “Understanding which plants are needed to maintain a healthy balance between bees and their parasites can help us restore habitats that maximize bee health.”

In addition to further researching the benefits of heather for pollinators, researchers are also looking at the possible benefits of heather for humans when they eat a heather honey. Regardless of the human benefit, though, if this study conclusively finds this plant helps bees, we may start to see heather being planted around the world as a way for honey bees to naturally address at least one of the challenges bees face today.