What to Do Should You See a Bee Swarm 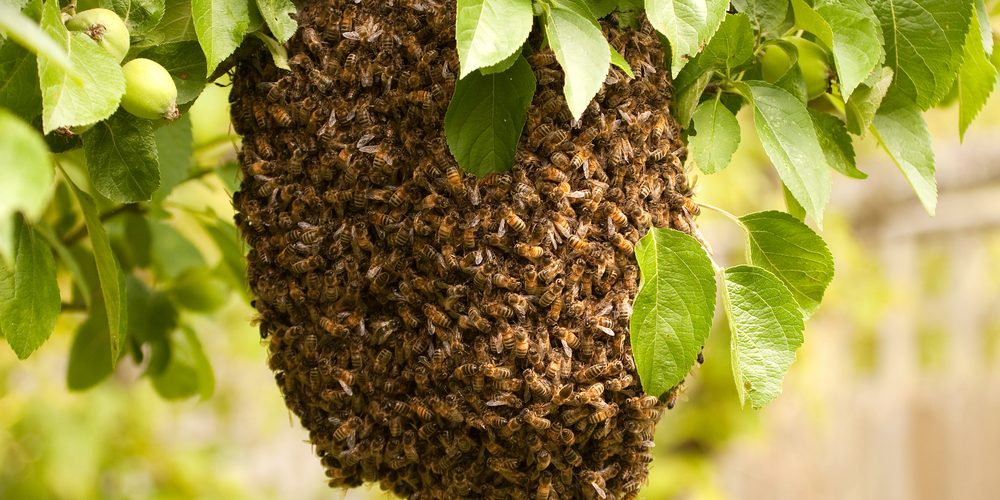 As summer approaches, so do honeybee swarms. During this time of year, hives that have grown unsustainably large gather up a new queen and split in half, forcing the new hive of honeybees to relocate and move in a cluster of thousands. While this sight may strike fear into people, the bees are, surprisingly, very calm when in these clusters and are unlikely to sting you. Honeybees are often full of honey and resting when in their swarm state, making them much more docile. Also, they usually only remain in this state for a couple hours before flying away. However, for those who worry about themselves or their families getting stung, it never hurts to call someone to, humanely, relocate them.

In Indiana, Kate Franzman, who owns Bee Public, dedicates her time to preserving honeybees. When asked about bee stings, she simply says, “It’s nothing to be afraid of. Honeybees don’t want to sting you, and they especially don’t want to sting you in their swarm state. If you walk out into your backyard and you see that, you’re probably going to freak out if you don’t know what’s going on. Of course, people are afraid that they’ll get stung or that their kids will get stung.”

When people in Franzman’s area come across a swarm of bees, they call her first. Once she arrives, Franzman takes the swarm herself and relocates it to a spot in the city. “It’s like $150 for a package of bees, and you don’t always know how they’re going to do. It’s great to catch a swarm, so I really wanted to tip people off.” She started Bee Public in 2013 and looks forward to the season every year. “Sometimes, you’ll see them, and they’ll be hanging in a ball, and it’ll look like a Christmas ornament,” Franzman said. “It’s really cool if you see it happening. It’s like a cartoon.”

Swarming is a necessary part of honeybees’ survival, preventing large hives from losing greater numbers of an already declining species. It may be tempting to spray swarms with pesticides, but not only does this hurt bee populations, you’re also running the risk of being stung — by a lot of bees. They won’t hurt you if you won’t hurt them, and, again, a swarm usually moves on anywhere between a few hours to a few days.

Rather than calling an exterminator, try to contact a local beekeeper. Thanks to colony collapse disorder, honeybees are already disappearing at alarming rates, and preserving as many hives as possible is essential for preserving their species as well as our own survival since we need pollinators for much of the world’s food supply.