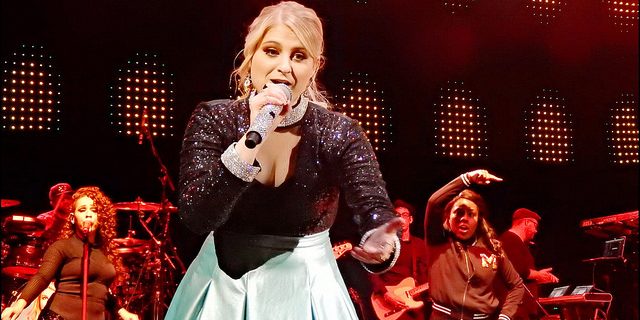 While she has been fairly busy working on her upcoming third album, Treat Myself, Grammy-winning singer Meghan Trainor took some time out of her busy schedule to sit down and open up a bit to her millions of fans, discussing the various things she totes around in her bag, which switches between a Gucci backpack and a Gelsons Market tote bag depending on the type of day Trainor is having. Among a list of many items was Manuka honey.

For one, the 24-year-old Trainor carries a new Blackberry model as her phone, which she described as being “sexy as hell. I use it more than my iPhone because I’m trying to take time off of social media. I love BBM-ing Daryl,” Trainor said, referring to her fiancé, Daryl Sabara, 26, who starred in the Spy Kids franchise. Speaking of Sabara, Trainor also carries the first jewelry her fiancé bought her, which was during a vacation in Hawaii. “We also bought a bejeweled pineapple case to keep it in,” Trainor added.

According to the singer, she has a certain love for buying keychains, but she doesn’t exactly have anything to put them on, causing them to pile up in her bag. “My Tesla key looks like a tiny car. It’s the most frustrating thing not to lose. No house keys because there’s always someone living at my house that opens the door,” she said. Additionally, Trainor keeps a pair of Ray-Ban Clubmasters with her at all times “just in case of paparazzi,” as well as several small Manuka honey packs for when her voice gets tried, which, as a singer, is a pertinent consideration.

As for everything else, Trainor has a few key items in line with what you would expect from a working adult in the spotlight—Gucci wallet, iPhone X, wireless headphones, even an iPad. Trainor also has Fenty lip luminizer, full coverage foundation and concealer, Vaseline, hand sanitizer, blue scrunchies, one Wet Brush in black, Stella perfume, and Kylie Cosmetics Koko K lip liner.

As for some other miscellaneous items, Trainor also has business cards, credit cards, one debit card, her driver’s license, a Bulletproof protein bar, some Lesser Evil Paleo Puffs, a Smart Water bottle, Listerine strips, a blue blanket from a Honolulu Hotel, tissues, clean dog poop bags, and her “five-minute” journal.

Want to try Manuka honey to see what all the fuss is about? To get your order started, click here. And, remember, we offer FREE shipping on all orders of $150 or more.