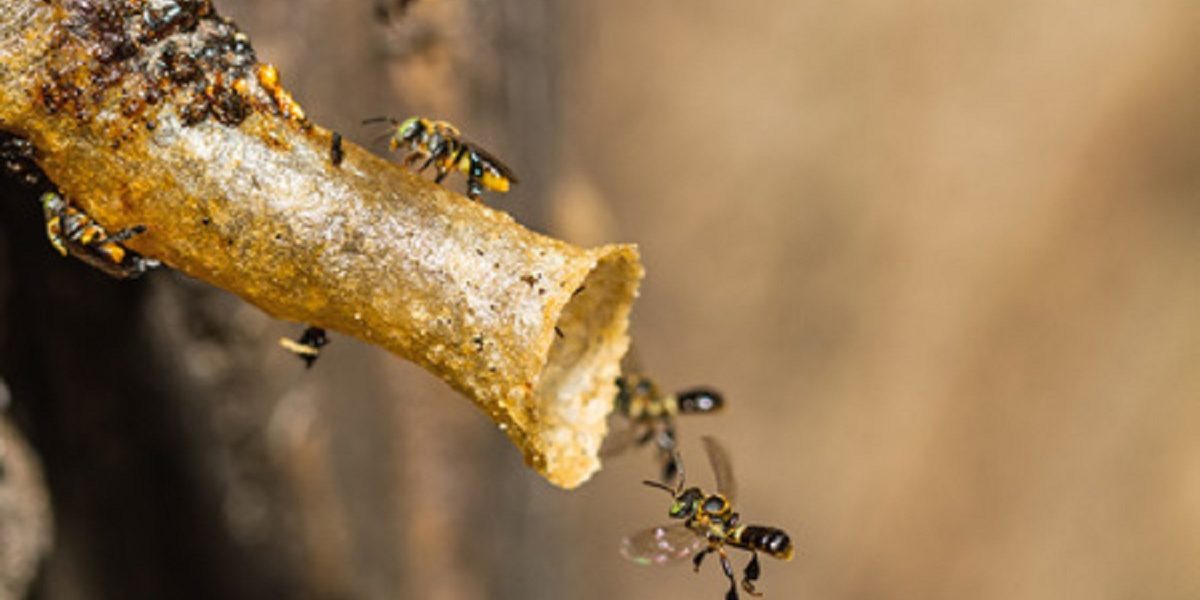 While stingless bees are without stingers, they still have ways to protect themselves. The Jetai bee, a bee species that originates from Brazil, is a great example. The Jetai bees have their own guard bees, which are larger and protect the entrance. These bees remain at the nest’s entrance in order to grab intruders during attacks with their robust mandibles, appendages located around the bee’s mouth.

A team of University of Sao Paulo researchers, partnered with biologists from Johannes Gutenberg University, identified four other species with a similar “soldier” role for hive defense. “This is therefore not a solitary case, as it seems there is an astounding variety of social organization among other stingless honeybees,” said JGU’s Dr. Christoph Grüter. The researchers studied 28 various species from different Brazilian habitats.

There are over 500 different species of stingless honeybees globally, and 400 of them are located in Brazil. These bees form social hierarchies similar to that of European honeybees, with their division of labor being based on age. Younger bees are similar to nurse bees, taking care of cleaning the nest and feeding larvae. As they age, nurse bees move closer to the exit until they can become foragers.

The Jetai bees’ defense system is fairly similar as well—the colony has a queen they protect and gather pollen for. Robber bees can be an issue, however. Many stingless species are vulnerable to attacks by intruder bees since they don’t forage for themselves—rather, intruders steal pollen and honey from other nests nearby.

However, Grüter discovered that intruders experience difficulties when trying to assault Jetai bees. This is due to the sheer size of the guard bees, which allows them to be better fighters. “We have established that the hive guards of a number of species out of the total of 28 we examined are larger than other worker bees. These soldiers are between 10 to 30 percent larger than the pollen foragers of the same colony,” Grüter explained.

Evolutionary biologists have discovered that larger guard bees are found in species that face frequent attacks. Therefore, the attacks are the force behind their evolution. “We were able to clearly link the activity of robber bees to the evolution of these soldiers,” Grüter clarified. Unlike worker bees, they are the largest in the hive as soon as they hatch. The division of labor is based on age, but it is also based on morphology, leaving the guard bees at the top of the hive’s social hierarchy.