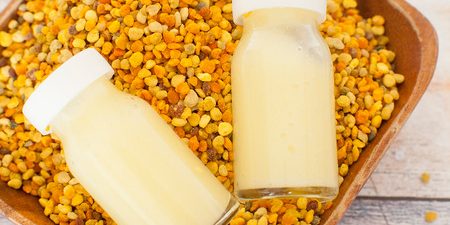 Honeybees have proven themselves to be tiny, complex creatures whose patterns of behavior continue to offer insights into more than just the animal kingdom. In addition to their crucial role in our agricultural system as pollinators, they can also produce various beneficial substances human beings have learned to safely extract and use, such as beeswax and honey. However, according to a recent study, in turns out that a lesser known product of hive life, royal jelly, has plenty to offer as well, specifically a unique molecule for can allegedly speed up a wound’s healing process.

What is Royal Jelly?

This particular type of jelly is of a special variety that is fed to all of the larvae within a hive, but it gets its name from the role it plays in producing queen bees. When a queen bee is showing signs of age or has died, the worker bees will choose several developing larvae as potential queens and submerge them in the substance. At which point, whichever larva survives this queen battle royale will then be the mother of the entire hive’s new generations of bees. Over time, beekeepers developed ways of stimulating queen bee production in order to eventually harvest the resulting royal jelly.

The sticky, milky white substance is a bee product often seen in a lot of health food stores, but any concrete evidence over royal jelly’s benefits as a food supplement have been quite limited. The suggestions of its capabilities as an antiseptic or promoter of wound healing have also lacked much in the way of evidence, which is why a group of scientists decided to look into it.

This group of scientists, from the Slovak Academy of Sciences, claim to have evidence of a molecule within royal jelly that can help specific skin cells reorganize themselves and thereby close over a wound. To describe how such a thing might be possible, when a person’s skin has been damaged, two main cell types must become active—keratinocytes and fibroblasts, which create molecules that can quicken the propagation of new cells that the skin can use for repairing the damage.

The supposedly special molecule royal jelly has—a peptide called defensin-1—is said to help skin cells complete this task. This molecule originates from a class of antimicrobial proteins that can be found in animals like humans. Defensin-1 also quickens production of the enzyme MMP-9, which plays a crucial part in rebuilding the skin’s cell matrix.

These researchers previously investigated another protein they thought could accelerate MMP-9 production, but it ended up not being the case. “One potential candidate that potentially participates in wound healing is MRJP1, which is the dominant honeybee protein present at high levels in both royal jelly and honey,” the team wrote. However, defensin-1 in royal jelly did greatly increase MMP-9 production when they tested the molecule on keratinocyte cells.

Upon isolating the peptide, the researchers tested to see how it might perform on real wounds. Using 20 lab rats with four equal wounds each, the researchers tested various experimental and control groups, and 15 days later, there was a considerable difference in how fast the defensin-1-treated wounds healed compared to the controls. While the researchers concluded the defensin-1 peptide contributed positively to the healing process, the amount of it within royal jelly is incredibly variable, meaning everyone shouldn’t go out and buy jars of it in bulk just yet since there is still so much to learn about it in general.