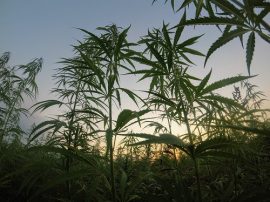 So, what do you know… bees like to get their party on just like everyone else! Well, not quite, but they do apparently have an affinity for hemp plants, according to researchers from Cornell University. As it turns out, the bees get no effect at all from the hemp itself, with one of the authors of the study stating, “The presence of cannabinoids, particularly tetrahydrocannabinol (THC), in hemp pollen (York et al. 1975) is not likely to have an impact on bee development due to the loss of cannabinoid receptors in insects.” This study offers quite a few possibilities for both farmers and bees, especially the honey bee, and the marijuana industry itself.

The researchers from Cornell studied bees that visited hemp plants around the Finger Lakes region in New York. They made several collections of bees while they were visiting the plants and found that among the 16 different species of bees they captured, the European honey bees were the most popular. This is the most common type of bee currently used by commercial beekeepers. After the honey bee, roughly 30 percent of the bees captured were the common eastern bumblebee.

With marijuana now legal in about half the country and very likely nationwide in the near future, we need to start paying attention to what pesticides are being used on these plants being grown by approved growers. Since honey bees are quite fond of the plants, we need to ensure wild honey bees are being protected.

If the bees have the same impact on hemp as they do no other plants, this will improve the yield, so marijuana growers will more than likely start to use commercial bees at some point if that turns out to be true. That being the case, we cannot introduce these bees to a harmful environment. The authors of the study wrote, “As cultivation of hemp increases, growers, land managers, and policymakers should consider its value in supporting bee communities and take its attractiveness to bees into account when developing pest management strategies.”

Now, this is pure speculation on my part, but if marijuana growers start to use commercial bees, could be there possibly be a honey-based edible product in our future? For a variety of reasons, some individuals permitted to use cannabis and that able to purchase it casual use states do not like to smoke or rape. Having a product that could be turned into a honey candy, honey lozenge, or just plain honey to use in drinks and food prep would be incredible.