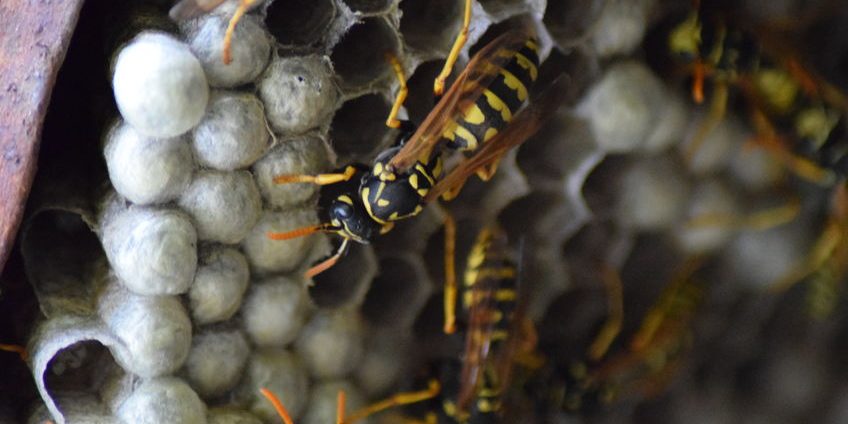 For anybody who thinks there are way more yellow jackets around this summer than normal, it’s because there are. The stinging pests, frequent disturbers of barbeques everywhere, are rearing their ugly heads in terms of numbers, and, unfortunately, we’re not the only ones who are suffering as a result—honey bees, crucial pollinators already on the decline, are common prey to the carnivorous yellow insects. “We tend to see more of them because it’s hot and dry earlier this year,” says Rob Burns, who is a master gardener with Oregon State University’s Extension Service. “They’re actively foraging, and they will attempt to attack a honey bee hive, but a strong honey bee hive will be able to defend itself.”

According to David Humbert, a beekeeper for the last three years in Oregon, he lost 50 percent of his honey bees in 2017, with yellowjackets being the sole reason. “They’ll go into the hives—they’re hunting for protein to make it through the winter—and they’ll catch the bees and bite their heads off,” says Humbert. “A dozen yellowjackets can just clean out 50,000 bees.” Fellow resident Gloria McCrea has two hives as well and has been struggling with a similar yellowjacket problem. Despite putting several traps out, McCrea hasn’t had much luck. “They’re attacking my bees now,” McCrea said. “They fly in and decimate it, and they kill the bees.”

Honey bee hives do station guards, which, if there are enough, can protect the hive from yellowjackets. Humbert says beekeepers can combat yellowjacket invasions through baited traps, stating, “If you put it out in the April-May timeframe and you catch the queens, then no nests.” Also, per Humbert, if such a problem persists during summer, the same bait trap can be used with cat food instead to attract the yellowjackets into the traps.

According to Mr. Burns, yellowjackets are opportunists, so if you’re hosting an activity outside like a barbeque, it’s probably better to head inside. “If you’re bringing food out to a picnic table, you’re going to attract a lot of yellowjackets,” says Burns. If you plan on having an event like this, you should attempt to establish where the nest is beforehand. Per Chris Rusch, a master gardener, “You can eliminate them with a stream of insecticide straight into the nest during evening hours.”

OSU’s Extension Service also says if you must spray one or more yellow jacket nests, just make sure to hold off until the weather has cooled down as well and to use insecticide specifically labeled for yellow jackets, following the directions carefully.