Surfing Bees ARE a Real Thing 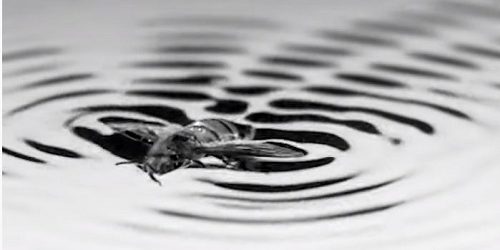 Honey bees are very incredible insects, this is something we are all very much aware of. However, even as much as we know about them, they still continue to amaze us from time to time with new facts. I have to admit, when I first read this story, I thought it was a complete hoax, but it turns out that an actual scientific study was done that proved bees have the ability to “surf,” kind of, when they are stuck in the water and need to get to safety.

If you have ever been stuck in water in a perceived dangerous situation, you know how easy it is to start panicking. For bees, however, that does not seem to be an option. When bees find themselves in this situation, they simply use their wings as a mechanism to glide over the water until they are able to get back to dry land.

Bees, like people, need water to survive. For this reason, you have likely seen bees at some point near a fountain, puddle, or pond. For bees, though, even a small body of water can be life-threatening. The problem for bees is that the bottom side of their wings are sticky, which can lead to their death if the wings touch the water. Bees, however, in some cases, can create their own waves in an attempt to get back to dry land.

Since the bottom part of the wing is sticky and the top is not, the bees are able to flutter, then use the motion they create in the water to glide over the surface until they hopefully get to dry land. The study showed a stroke that more or less resembled the butterfly stroke of a human swimmer.

This study came about completely by accident. Chirs Roh, an engineer at Cal Tech, noticed a bee in some water while walking by a fountain. He saw some bees stuck in the water but then saw how they attempted to escape the dilemma. This inspired him to take some bees back to his lab and study their actions more thoroughly.

Explaining how this all works, Roh stated, “When they get stuck on the water, what happens is that the bottom side of the wing gets wet, but the other side is dry. And when they try to free themselves, it’s very difficult for them to completely free their wings so that they can regain their aerodynamic ability. So instead what they do is pull on the water that’s stuck on the bottom side of the wing and when they’re pulling on the water, the water pulls on the bee- kind of like they’re playing a tug of war.”

He added, “When the bee pulls on the water, water pulls on the bee and it, therefore, moves forward. But the problem with the propulsion pulling effect is that water, once it’s pulled, is moving towards you. So, if you interact with that accelerating water, it will probably stop you, so they seem to be doing it so that they pull on the water and then move over it so they don’t have to be slowed down.”

And, yes, this actually was of interest in regard to engineering. Roh explained, stating, “A lot of flying in biology seems to rely on the flapping-wing system, but what we’ve thought out [for robotics] is you can keep that flapping wing system to fly but you don’t have to change much. When [the robot] actually falls in water or needs to do any sort of mission on the water surface and have some functionality there, you can use [the wings] by just pulling on the water. So that part is what intrigued us, [that there’s] another way you can move around on the water surface.”

So, there you have it… In addition to providing us with that delicious honey, bees may have helped researchers figure out another mode of transportation! To see the video showing how this all takes place, click here.