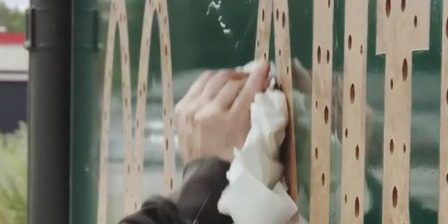 This is a simple but extraordinary measure that is being taken to address another concern for honey bees. Because of modern construction, many of the natural habitats for bees are disappearing. We see a direct result of this here in the states as times when swarms settle in areas where you would not normally ever see a honey bee, such as the fencing at a major league ballpark (yes, that happened at a Padres game earlier this year).

The inspiration behind the project was the massive losses being experienced by honey bees around the world and in this case, the high die-off rate experienced in Sweden over the past winter. As a way to help the bees, many of the billboards advertising for McDonald’s had holes cut in them for access points for the bees, then had small honey bee houses attached to the back of the sign for the bees to live. Additionally, beehives have been built on the rooftops of several McDonald’s restaurants throughout the country. Designer Nicklas Nilsson actually created a McHive, a beehive that mimicked the design of the restaurant and auctioned it off for $10,000, which all went to charity.

It was really interesting watching the construction of the hives (you can see the full video on YouTube, click here). In an earlier article, we noted how some researches believe the manmade beehives are just as much to blame for the massive losses over the winter as anything else, maybe even more so. They in no way mimic what a beehive looks like in the wild. One of the more notable problems is that most manmade hives use wood that is too thin to insulate the hives. The hives being constructed in Sweden appear to be made of much thicker wood, providing a more natural and safer habitat for the bees than most manmade hives would. This is pure speculation on our part, though, as we can only go by what we see in the video.

Regardless, this is a great effort being made by one of the largest and most successful companies in the world. With a little luck, we will see McDonald’s restaurants around the world follow suit and soon we will have McHive’s literally buzzing around the world!