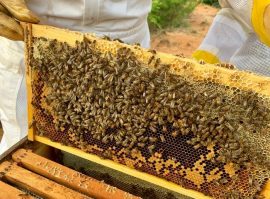 Education goes a long way to alleviate fear when it comes to honey bees. The fact of the matter is most people simply do not understand the normal behavior of a bee. In many cases, the normal and unaggressive actions of bees are considered a threat by those unfamiliar with them, and that is something local beekeeper Nicole Gurley is hoping to change.

There has been a lot of talk about how important the honey bee is to our crops, but Gurley believes it goes far deeper and is far more troublesome than that. She starts her lectures off with a question posed by Albert Einstein that states that within four years of honey bees becoming extinct, humans would follow. That is a pretty troubling prediction considering the fact honey bees continue to lose massive numbers virtually every winter and populations are now lower than they were decades ago.

Gurley, who is also the district librarian at LaPoynor Secondary School in Larue, Texas, offered an educational class to children at the East Texas Arboretum Nature Camp this week on the honey bee. She stated, “I want to educate children to understand the importance of honey bees for our food supply and to protect them.”

Beekeeping is a family business for the Gurleys. In addition to Nicole, her husband, Jeff, and their daughters, Madison and Elizabeth, all participate in the family beekeeping business. They offer regular educational lectures on honey bees at local school, camps, and daycare centers. Additionally, the family will also offer safe bee removal that will not harm the bees rather than calling an exterminator to use pesticides to kill off an infestation or to perform a hive removal.

Believe it or not, it was their oldest daughter, Madison (14), that got the family started in the bee business. She had won a scholarship from the East Texas Beekeeping Association. That led to an interest in the profession and the rest, as they say, is history.

During her presentation to the children, Nicole familiarized the children with everything from the anatomy of the bee to a beekeeping suit, which colors are calming to bees, and how they manage beehive works. In this case, Nicole showed the children a picture of a three-tiered bee box. We reached out to Nicole and she explained, “The smaller honey super on top and two deep boxes under that. The bottom one is where the entrance is and is the box that the queen lays most of the time. The second box up is where more eggs may be laid and where honey is stored.”

To learn more about the Gurleys and their family beekeeping business, you can visit their website (www.theanswerisbee.org).