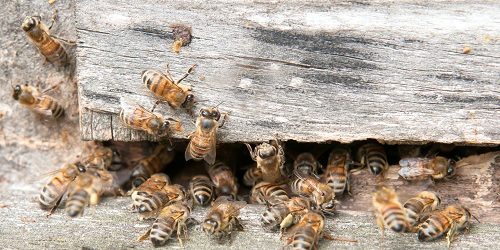 Many people might say that if you found out you had a massive hive inside your walls, extermination would be warranted. Thankfully, Annette Wiley of Kilgore, TX was not even considering that as an option.

Wiley has had a massive infestation of bees inside the walls of her home for years. She had contacted various different people and companies to deal with the problem, with most of them recommending that she just exterminate them. Thankfully, she refused to allow anyone to kill them simply to make her life a little better. Instead, she waited until she found someone that was able to safely remove them and save them.

Wiley stated, “Workers tried to smoke them out, put a box up and try to suck them out with a vacuum, nothing worked. And when they closed the hole up they would come in my house, they came through the outlets.”

Local beekeeper Ray Dickerson ended up being the answer to her prayers. Dickerson took a different approach by finding the queen to get the rest of the hive to follow. He stated, “It ain’t nothing to go to a house and they’ll have four or five swarms of bees in the springtime. When they swarm, they’ll go down the wall and just go back in. I just remove the bees when people have got them and sell a little honey and buy my supplies.” After he removed the bees, Dickerson stated that the hives looked to be about four to five years old. It is amazing Wiley was able to deal with this problem for that long without resorting to drastic measures.

Dickerson also happened to mention the problem with CCD, which hopefully people will see and realize this is a real problem in the honey bee industry. He stated, “Bees started disappearing real bad and I don’t know why. It’s called colony collapse. You go out there you got a full hive of bees, a few days later you go back they’re all gone, nobody knows why.”

This was a win-win scenario all the way around. Ms. Wiley finally gets to get some sleep without the sound of bees buzzing in her walls. Dickerson gets about 40,000 bees to add to his business. And both parties got free honey out of the walls!