The Importance of Honey Bees to Our Food Supply 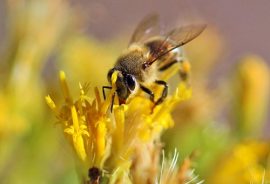 Over the past year, there has been a lot of talk in the media and on blogs like ours regarding the plight of the honey bee. With recent government cutbacks on bee surveys, the honey bee has made its way into the political realm. This has introduced the honey bee to an entirely different audience.

Oddly enough, from what I have seen on social media, people on both sides of the aisle are becoming quite interested in the future of the honey bee. It is actually quite ironic that as divided as the country is politically right now, the honey bee is proving to be the common ground. This is not for a random reason, either, as most people truly understand the importance the honey bee plays in our agricultural world.

Just how important is the honey bee? According to the Director of Penn State’s Center for Pollinator Research, Christina M. Grozinger, Ph.D., “Honey bees, wild bees, and other pollinators – the second most important type of pollinator are flies! – contribute to the pollination of three-quarters of our major global agricultural crops, including the fruits, vegetables, and nuts that provide most of our vitamins and minerals.”

She also stated, “Pollinators – including honey bees – visit flowers to collect nectar, which is their source of carbohydrates, and pollen, which is their source of protein and fat. As they move between flowers, they will transfer pollen. This allows the plants to set seed and produce fruit.” Mark Heckman, co-Owner of Heckman Orchards, added, “Bees are very important for our apple crops and different vine crops. They need pollinators, or we definitely would not have as good a crop.”

Without the honey bee, industries like skin care would also be greatly impacted, as many of these crops are used in the skin care industry in the form of extracts, such as the safflower, apples, and melon. Hopefully, colony collapse disorder is address and fixed soon, or least controlled to the point our beekeepers are no longer losing 40 percent of their hives every year.

Source: Pocono Record, “Honey bee” by Monkeystyle3000 is licensed under CC BY 2.0