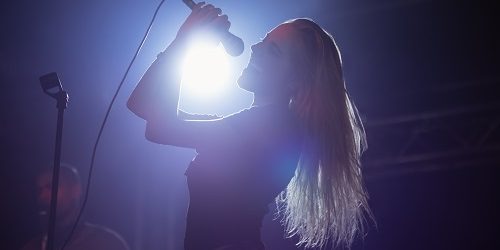 In recent years, some professional singers, actors, and other performers have been singing the praises of Manuka honey and its ability to help protect their voices. However, it’s not just the pros who are taking advantage of this special honey—even newcomers as young as 15 are working hard to ensure their voices are safe and soothed. Just take Richmond, Australia’s young Paige Peters, whose singing talent is already so well-known in that part of the world that the top entertainment honcho for Sydney’s Royal Easter Show personally contacted her to sing Australia’s National Anthem for this year. She didn’t even need to audition for the honor.

“I was really shocked, then I was so excited to be able to get that opportunity to sing,” Peters stated to her local news media. Peters, who is in her tenth year at high school, has been a singer since the age of seven, and she landed this huge gig thanks to videos posted on Facebook by her mother that highlighted her singing. Peters will sing Australia’s National Anthem each night of the Royal Easter Show at 6:30 pm, and she’ll be unaccompanied during the performances, with only her well-trained voice to get the crowd going.

“It’s frightening but exciting at the same time,” Peters said. “I’ll be standing on the back of a truck, but I’m going with a casual-elegant look, with some nice dress pants, some nice jumpsuits, and shirts.” While this won’t be her first time in front of thousands, Peters admitted to fighting back some nervousness. “They’re starting to come to me now that the show is so close,” Peters added. “I don’t like having musical accompaniment when I sing the National Anthem, as I like going at my own pace, so I asked for no music and they allowed that.”

Peters has been working with the same singing teacher for eight years, and they have weekly check-ins before big performances, and they’re both making sure her voice is in pristine condition for her upcoming nightly ballads. “My vocal coach has been working with me to prepare, and I also know how to protect my voice so I don’t hurt it,” Peters said.

“A really good thing for vocalists is Manuka honey—it helps soothe your throat for sore voices. Lemonade can help calm your nerves and also help a sore throat.” Peters has trained her voice for more classical pieces, but she’s also enjoyed singing pop as well as musical theater—all of which will certainly be helped by this modest but highly impressive singing opportunity in Sydney.

Ready to try some Manuka honey and see what all the fuss is about? Click here to get an order started. Order $150 or more and the shipping in on us!