More Urban Beekeepers Putting in the Work to Save Bees 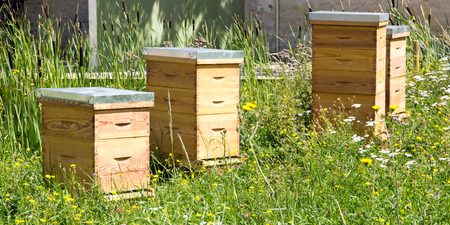 Within a town most people other than its residents have likely never heard of, a steady rise in urban beekeepers has become apparent, coinciding with similar growths in other cities throughout the country. This town – Greenville, West Virginia – has been seeing hives pop up in even its most populated areas, with two of them being properly stationed in the backyard of Matt Putnam, who came upon beekeeping by complete accident, specifically through an article in a local publication. “…It seem[ed] so doable,” said Putnam, who harvested 30 pounds of honey last year. “At first, I couldn’t find the time to start, but I eventually quit fighting the urge and just fell into it from there.”

Others like Putnam realized the exact same thing. Lee White, Putnam’s neighbor, also manages four bee hives, which in total contain over 80,000 honeybees. Being only 14 years old, White started a honey business in 2016, selling about 130 jars. As well, a local restaurant, Farm Fresh Fast, plans on installing a beehive on its roof to harvest natural honey for their recipes. “Bees are sort of the new backyard chickens,” said Jennifer Tsuruda, who is a beekeeping specialist with Clemson University. “People want to know where their food comes from, and they want to feel more connected to the environment.”

While Putnam ultimately got into beekeeping to make his own honey, which he uses as a substitute for sugar, he has also stated beekeeping has caused him to be more conscious of the environment. For example, he has stopped using pesticides and similar chemicals that have been tied to colony collapse disorder and declining bee populations. “I’d like to think I’m actually helping the country’s bee population recover,” Putnam said.

Susan Jones, the president of the Piedmont Beekeepers Association, believes this line of thinking has led to the rise in backyard beekeeping. “Beekeeping has traditionally been limited to farms, but I think people everywhere want to feel like they’re actually doing something to help out,” Jones said.

Putnam has even gone a step further by using his colonies to educate his neighbors regarding declining bee populations, stating he often gets many questions and many chances to explain why they are struggling. He even claims to have dissuaded one of his neighbors from spraying last spring for mosquitoes, which is commonly overdone these days due to fears of the Zika virus. “It’s hard to say whether or not I’m actually impacting the global population,” Putnam said. “I think education is a bigger component for me. I’m sort of an ambassador for the species.”