Why Leafcutter Bees Are Good for Gardens 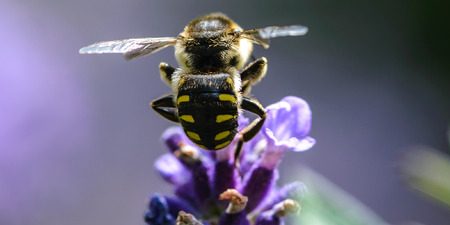 Adult alfalfa leafcutter bees range in size from 0.25 to 0.8 inches in length. They’re usually black with white or pale yellow bands and are known to have white or silver hair on top of their abdomen. The alfalfa leafcutter is a solitary wild bee, building nests wherever suitable. The nests are often built in small cavities like tree trunk cracks or holes in the soil, but they don’t create holes or damage structures to make holes for their nests. Instead, they build nests in dwellings made by other insects.

Female leafcutter bees use their jaws to cut out the circles they need to create cells for their nests. The nests resemble a cigar, and inside each one is a little cell for each egg—a leafcutter bee may have one or more cells depending on the size of the nest. Each cell is then packed with pollen and nectar that have been collected, which baby bees feed off until they hatch into larvae. The larvae then transforms into pupae before spinning a cocoon and emerging as adult bees.

The leafcutter bee is gentle natured and less aggressive than most bees. They have stingers, but they only sting if they feel their life or nest is being threatened. Each bee serves as a solitary queen, with males helping to fertilize before dying within two weeks. Each female seals each chamber cell with a cut leaf to protect her eggs while away pollinating.

Although leafcutter bees spend most of their time cutting into plants, they’re still a huge contribution to gardens. They’re valuable because they’re capable of pollinating many types of flowers and crops. So, next time, if you see a few bitten leaves in your garden, understand it’s just evidence of your local pollinators at work.