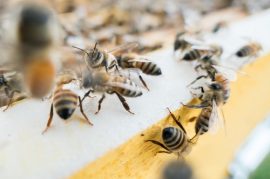 As far as most people are concerned, the bee’s main purpose on this planet is as a pollinator. While that role is extremely important, as it turns out, bees may have another very useful purpose. In fact, this new purpose could shed even more light on the plight of the honey bee so the government will reverse its decision to end the honey bee surveys as well as reconsider the recent decision to loosen regulations on pesticides known to be harmful to the honey bee.

Beekeeping has been around for hundreds of years. However, beekeepers did not realize honey bees could be trained to do certain things other than their normal honey making duties until several decades ago. One of the more useful “tricks” a honey bee can be trained do is to stick out its tongue. This is a skill researchers at the University of Wisconsin-Superior believe can be put to use in a variety of ways.

Honey bees have already been put to work by the medical world in detecting tuberculosis where labs are not available for testing. The UWS researchers believe the honey bees can be just as useful when it comes to detecting breast cancer. You see, the antennae of the honey bee are even more sensitive than the nose of a canine. In fact, it is not even a contest. It is estimated that the honey bee antennae are more than 300 times more sensitive to odors than a dog’s nose.

Dr. Edward Burkett, a biology professor at UWS, is very much aware of the recent plight of the honey bee. He stated, “We have to reverse this trend through education, research, and outreach.” Living in Wisconsin, Dr. Burkett is very much familiar with the problems beekeepers are having in keeping their hives sustainable during the harsh winters. Wisconsin is one of many cold-weather states reporting excessive losses this past winter. Burkett stated, “Honeybee health is one of the most important issues today. It is worth our time to mentor others who are trying to help.”

A recent student of Dr. Burkett and the current Head of the Lakes Beekeeping Association, Jami Koivisto, believes Burkett has some great ideas on how to help honey bees survive better. One idea is to purposely breed a new type of bee, a “mutt bee,” rather than continuing to order new bees to replace the bees that are lost over the winter. These bees would be bred specifically to withstand the colder temperatures of the winter. If you would like to learn more about the Lakes Beekeeping Association, you can visit the website at www.hotbees.org.