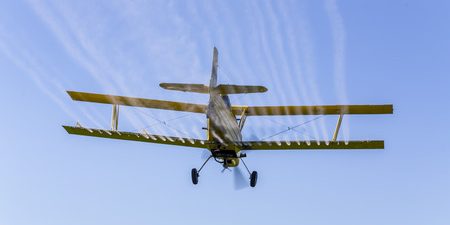 The threat of Zika virus is a legitimate one, especially when considering the effects the disease has on unborn children when their mothers contract the virus, causing birth defects in the children. Given Zika is generally spread through mosquitoes just as malaria is, there have been considerable efforts on the part of local and state governments to combat the virus, which is said to have 31 cases in the US so far (granted, all of these cases were contracted abroad). Some of the efforts include truck spraying, which local honey beekeepers are typically made well aware of in advance to protect their hives and honeybees.

Dorchester County, South Carolina is said to have four cases of Zika, and perhaps in an effort to protect the county further, it was decided the first aerial spray in 14 years would be implemented to combat the county’s 61 species of mosquitoes, according to county administrator Jason Ward. On a Sunday, the spray fell between 6:30 and 8:30 am after the sun had risen. The only issue was anyone not officially registered as a beekeeper, anyone who didn’t check a rarely used Facebook page, and anyone else who found themselves uninformed that an aerial spray with the toxic pesticide naled would be falling from the sky just as their bees were coming out to forage had to witness their entire hives die from poisoning.

“We chose Sunday morning because few people would be out and about that early on a weekend,” Ward said. “To protect the bees, you don’t want to spray after the sun has been up more two hours, so we scheduled it early.” For Juanita Stanley, a registered Dorchester County beekeeper and co-owner of Flowertown Bee Farm and Supply, the calculated effort is poor comfort for the devastating image of her honeybees becoming poisoned as they dragged out their dead hive-mates. “On Saturday, it was total energy, millions of bees foraging, pollinating, making honey for winter,” Stanley said. “Today, it stinks of death. Maggots and other insects are feeding on the honey and the baby bees who are still in the hives. It’s heartbreaking.

“I knew when I got to my bee yard it was bad. I couldn’t hear anything…It was silence.” The product containing the pesticide naled, called Trumpet, is recommended by the EPA and the CDC for controlling the mosquitoes that transmit Zika. Trumpet is “highly toxic to bees exposed to direct treatment on blooming crops or weeds. To minimize hazard to bees, it is recommended the product is not applied more than two hours after sunrise or two hours before sunset, limiting application to times when bees are least active.”

According to Ward, the county followed the recommendation to a fault, but it only informed registered beekeepers two days before the spraying. “They told me in advance [when truck spraying], and we talked about it so I could protect my bees,” Stanley said. “But nobody called me about the aerial spraying. Nobody told me at all…’Do it at night when bees are done foraging,’ I would have told them. But they sprayed at 8 am Sunday, and all of my bees were out, doing their work by then.”

“We are obviously saddened by the fact people have lost their hives, and we have gone back and looked at our procedures,” Ward said. “We will now give up to five days of advance notice, and we have expanded our list to include more local beekeepers.” This tragic incident does hold a danger of being repeated, showing local and state governments should be more forward-thinking and less panicked and reactive when combating a threat with so far no localized origin.