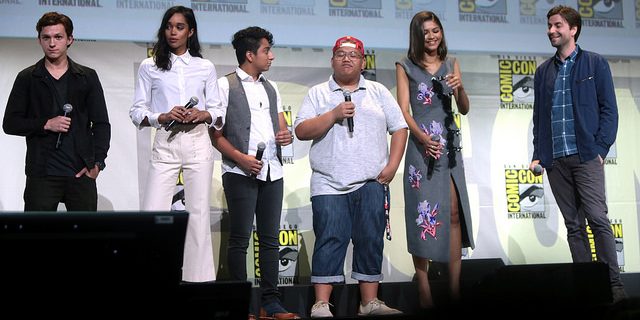 Laura Harrier, who recently starred in the award-winning “BlacKkKlansman” and the superhero blockbuster “Spider-Man: Homecoming,” is currently one of Hollywood’s most in-demand actresses, with the new year bringing in two more movies to the 28-year-old’s roster, including a sci-fi thriller called “Warning” with Alice Eve and Annabelle Wallis. While awards time is very exciting for any up-and-comer, it’s also trying to have to constantly look your best for the cameras. To make multiple red carpets easier to walk, here is what Harrier does in order to survive the spotlight and what some of her beauty and fitness routine looks like.

Per Harrier, she uses a custom face wash while showering as well as a lactic peel for when she gets out. “If I’m breaking out, I’ll go for the Active serum, and if my skin is dry, I do the Pro-Heal,” Harrier said. “When I moved to L.A. from New York…I didn’t know anyone. The girl who does my eyebrows told me about Shani [Darden, her aesthetician], and she kind of saved my face.” Darden told Harrier what her skin needed, and what she needed was help with breakouts, which Harrier didn’t struggle with until her late 20s. Also, Harrier uses Manuka honey masks, but she really “amps it up” when her breakouts get especially bad.

Harrier reportedly loves “to watch the makeup artists at work,” because “now I can do my makeup for an event if I have to.” In terms of her daily makeup routine, Harrier prefers to keep things minimal. “I do the Nars concealer—my color is Caramel. I have the Tom Ford Shade and Illuminate palette that comes with the two colors. I throw on the highlighter for every day and do the contour color if I’m going out.” Harrier also prefers Glossier’s Lash Slick mascara, given “it’s pretty and natural.”

“I’ve learned the most from [Hung Vanngo] and from Nina Park,” Harrier said. “Nina has taught me that if I have an early press day and look terrible, do a lip…With an eye look, you can still look tired and droopy. A bright lip color is lifting, and, honestly, it’s easy.”

According to Harrier, she’s been lazier with fitness in Los Angeles compared with New York. “In New York, I would go to the Dogpound…Now, in L.A., I go to SoulCycle and barre class and hot yoga, but I bounce around. Also, I’ve been traveling so much that it’s hard to keep anything together. I downloaded the Nike app to work out while I travel, and I think I did it once.”

When it comes to her diet, Harrier focuses on moderation, saying, “I work out, but I love cheese, pasta, and wine. As I say that, I’m drinking a green smoothie that was a million dollars at Erewhon. The truth is, the timing of awards season, right after the holidays, is really cruel. I’m not at my peak right now. Honestly, I’m just trying to work out a lot, and I’ll go to Shani for a peel before a big awards show.” Harrier also does infrared saunas, which she feels helps her a great deal. “There’s also this infrared sauna where they wrap you like a burrito,” Harrier said. “I haven’t tried that one yet, but it kind of seems like torture. You’re paying someone to wrap a hot blanket around you.”