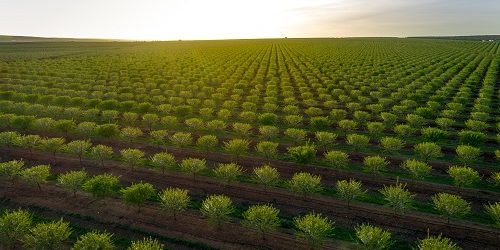 As we all know, the honey bee population in Australia has been devastated by wildfires. This has caused quite a panic in the beekeeping and honey industry throughout the area. Australia is already fighting for its life against New Zealand over Manuka honey naming rights, so this disaster was the last thing it needed. There is, however, another industry in Australia that can and will be impacted significantly by the loss of honey bees… the almond industry.

In all, it is estimated that more than 6,000 hives were lost during the fires, possibly more. There are still the after-effects of the fire that are causing even more losses. The heavy smoke exposure has continued to hurt the bees and, of course, there is the loss of plants and crops for bees to pollinate. At this point, there is simply very little for bees to feed on, which has beekeepers scrambling to provide nourishment to the bees that survived. On top of everything else, there is a drought, so replenishment will not be an easy task.

As most of you know by now, honey bees play a vital role in the almond industry. This crop is very much reliant on honey bees, so the industry is expecting to take a significant hit due to the wildfires that wiped out thousands of hives. Australia is the second-largest almond provider in the world and it plays a significant role in the agricultural economy of the country, as does honey bee pollination. According to recent reports, this is a $6 billion industry that is very much at risk right now.

For the 2018-19 season, Australia exported roughly $371 million worth of almonds, which was an increase of more than 12 percent from the previous year. The health craze has given the almond industry a huge boom, especially when it comes to the sales of almond milk and its byproducts. China in particular relies heavily on Australia for this crop (in addition to the United States, which exports more than $500 million annually to China in almonds).

One solution that is being looked at right now is recruiting honey producers to focus on pollinating for the season. This, however, may be a tricky sell to beekeepers still in business, especially if they are producing Manuka honey. The shortage of bees will no doubt drive the prices of Manuka honey up considerably, especially UMF honey. The current market price here in the United States is around $75-80 per jar, so almond growers are going to have a tough time matching that income level for beekeepers.

Something else for almond growers in Australia to consider is that while they will need to drive prices up, the new trade deal China signed with the United States will mean the U.S. will be importing even more almonds to China, creating a significant problem for Australia in terms of matching pricing. Currently, the United States accounts for 79 percent of the almond trade with Australia a distant second at six percent. Those numbers could change dramatically if Australia’s almond growers do not get his figured out ASAP.