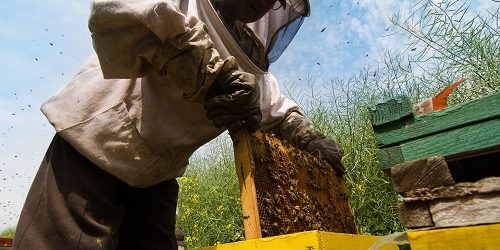 According to Norman Gary, a retired apiculturist, pesticides, predators, parasites, and a variety of microorganisms are constantly threatening honey bees’ chances of survival. However, another, more obscure threat exists—hobbyist beekeepers in urban areas who rear too many hives for honey bees to thrive in any way. Per the 85-year-old Gary, whose experience with bees includes being a scientist, a professor, an author, and a pro bee wrangler, hobbyist beekeepers should limit themselves to just two colonies.

“Increasing populations of bees can easily ‘overgraze’ the resources,” says Gary, who’s known as the “Bee Man” on an international level. “Excessive competition for limited nectar and pollen sources also threatens hundreds of native bee species, such as bumblebees, that have similar dietary requirements.” He also says it’s time that people “recognize the realities of the urban environment and make appropriate changes in beekeeping practices.”

Urban environments, from San Francisco to New York, can vary greatly, such as small residential areas typically having limited vegetation whereas smaller urban spots may contain “open countryside” in a colony’s foraging area. “The yield of honey per colony is declining significantly in urban environments,” Gary said. “These declines leave no doubt that overpopulation of bees in urban settings is the primary cause. Few beekeepers are aware that each bee colony consumes at least 100 pounds of honey annually…When nectar is abundant and there is good weather for foraging, a typical honey colony has the potential to produce more than 100 pounds of harvestable honey per year.”

As can be imagined, that is much more than a typical hobbyist beekeeper can harvest these days, with Gary relating that this makes it fairly obvious that hobbyist beekeepers have too many hives in standard urban environments. “Hobby beekeepers typically start out with one or two hives, but that often leads to several more due to their enthusiasm for keeping bees and harvesting more honey and equating the number of hives with elevating their status as beekeepers.”

As a recipient of a doctorate from Cornell University in entomology, Gary was part of the University of California Davis’s entomology faculty from 1962 to 1994. He’s authored over 100 published works, including book chapters, scientific papers, and highly regarded articles in trade journals. A beekeeper for the last 70 years, Gary started keeping bees in Florida at the age of 15 and has been a commercial beekeeper, hobbyist beekeeper, deputy apiary inspector for New York, entomology professor, research scientist, bee wrangler, author, and a Guinness World record holder. Gary has also worked as a bee stunt coordinator and consultant for 70 television shows, 17 movies, and six commercials. His credits include “Fried Green Tomatoes” as well as late-night appearances on Jay Leno and Johnny Carson.