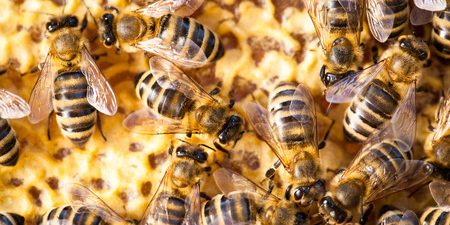 In recent decades, it has become a more common practice that, rather than call an exterminator to get rid of a swarm of honeybees—as you would do with infestations of cockroaches or mice—you call a local beekeeper or the beekeepers association nearest to your area. It’s easy to associate honeybees with similar bugs like the aggressive yellow jacket and wasp, but it is just as easy to see them as an essential part of agriculture and nature. With that, the decline of honeybees and other pollinators around the world should be a solid reminder for everyone how crucial it is that any hive, commercial or wild, in an undesirable location be moved rather than destroyed.

Bees in the Chimney

However, sometimes mistakes are made and lethal force is used when it should not be. In the Macarthur region of New South Wales, Australia, four honeybee hives were inside a historic building in the town of Camden, specifically in the chimney, for over 20 years, per Alistair Kilfeather, a spokesman for the Macarthur Beekeepers Association. “The hives have been in those chimneys for years,” he said.

Kilfeather continued by saying, “After being personally consulted four to five years ago, I believed removing the beehives would be a very difficult job.” The historic Macaria building, which will soon become an art gallery, once held the Camden Council’s chambers, even while there were bees in its chimney. Regardless, it was decided that the four hives would be destroyed, and they were. This was a decision that provoked criticism from members of the community, who believed alternative options should have been considered.

“I find the decision absolutely disgusting,” said local resident John Smith. “With the high importance of honey bees surely either sealing the chimney … or a beekeeper may have been able to remove them and take them elsewhere.” As in other countries, honeybees are major pollinators for many crops in Australia, with roughly 65 percent of its agricultural output depending on bees.

Contrary to other community members, Kilfeather supported the Camden Council’s decision, saying they had considered each option and that extermination was the most logical choice. “Anyone who has to remove the hive has to either kill them or chase them. It’s difficult,” he said. He also stated that honeybees in such a small, confined place are not the type of thing people want in a building with many visitors. “For example, if the bees got into a school, they would also have to be eradicated.” Outcry has continued in the days since the hives were exterminated and may continue still.