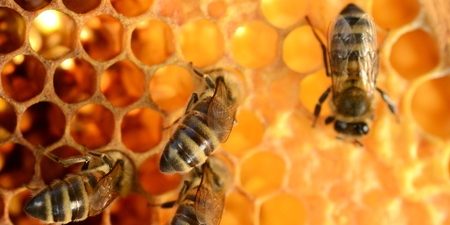 Insects like the honeybee can be quite fascinating beyond how the effects of human beings have likely contributed to the substantial decreases they’ve seen in the last 20 years. An interesting fact to be had about them is the way in which they communicate among one another within a hive, specifically their use of the “waggle dance” for describing to their nest mates where to find distant foraging locations. They also use what is called a “round dance” for describing foraging locations within close vicinity to the hive between 50-100 meters, but the waggle uses more specific, coordinated choreography for describing sites that are several miles away.

Oddly enough, the data-collecting process bees use to support these informative waggle dances is a lot like the one used by home security sensors for detecting human activity outside of a home, leading some researchers to explore how bees process electrical fields to observe their environment – just like home security sensors. To take it even further, bees also gather information from each other by their sense of smell about what might be found at the foraging location (type of pollen, water, food) as well as other characteristics.

Recent updates in sensitive instrumentation have led to researchers learning even more about the way bees transmit and receive information through their dances. In one instance, key clues into how these dances influence other bees came from observing fish. Specifically, some fish can identify age, gender, and other traits in members of their own species by sensing emitted electrical fields. As well, bumblebees were discovered to use the delicate mechano-sensory hair on their bodies for detecting weak electric fields near flowers they intend to feed on.

As others discovered with bumblebees, Uwe Greggers of Berlin’s Free University measured electrical fields stemming from honey bees in various circumstances, including during waggle dancing. The mechano-sensory, hair-like structures covering honeybees act as antennae for receiving electrical field signals, and they’re paired with nerve endings, which transmit signals into the brain for processing and storing.

To get a better understanding of electrical fields, they reflect the existence of matter—meaning they are everywhere. In static environments, every exposed surface is in a balanced electrostatic state. Introducing a new movement or substance and disrupting this balance elicits specific patterns of disturbance. The disturbance in the electrical field is unhindered by barriers and walls—a charge on one side of the wall is balanced with the charge on the opposite side.

Matter is continuously generating electrical fields, which are manifestations of that matter’s atomic structure or, more specifically, its energy and electron count. Because an electrical field reflects the electron profile of an atomic or molecular species, it is as unique as a fingerprint. It’s this ability to detect these electrical fields and identify unique atomic structures that allows bees to identify exact flowers as well as other entities—hence, the specificity of their waggle dances.

Home security systems can also distinguish “fingerprints” with electrical field sensors detecting human motion, position, limb movements, and size. They can recognize an infant’s posture in a car seat and individuals in different locations and positions through many walls. Such monitoring tools take much from the tools honeybees naturally possess, which could be argued is one of the more fascinating facts about a species most people only think about when their numbers drop.