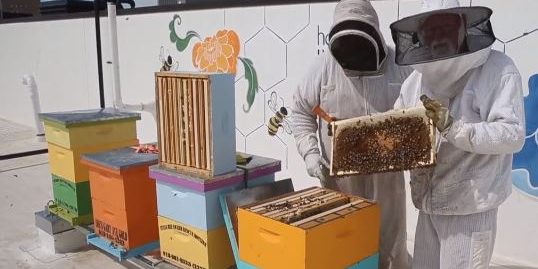 For most people, a room at the Indigo Hotel in Downtown Tulsa will cost about $125/night. Ownership, however, has made a concession for bees, and now has a quickly growing colony atop its roof. That’s right, no rooftop lounge or pool, just bees. It is actually the type of story we wish we hear far more often by local business owners being will to help out with the honey bee crisis.

The rooftop quarters for the honey bees were only made possible due to the generosity of hotel owner Jeff Hartman. He is now working with local bee rescuers to place any rescued hives on the rooftop colony of the hotel. According to Hartman, honeybees have always been a secret passion of his and he wants to do his part to help them both survive and thrive.

Hartman stated, “Being a downtown hotelier — I have three hotels downtown — I took a visit to a high-rise hotel up in Chicago one time, and they have rooftop bees on their 30th floor. I thought: That’s a great idea.”

The Indigo does have an outside bar, but it is one level down from the sixth floor. That being the case, they wanted to take this project slowly to ensure it would work without unleashing a swarm on the hotel guests enjoying the outdoor bar. Hartman stated, “We experimented with it. We only did one or two hives, I believe, in the beginning because our rooftop bar is only about 100 feet away (and one floor level below) from here. We wanted to make sure they weren’t going down, and we have not seen one bee at the rooftop bar.” Eventually, Hartman stated he plans on incorporating the honey harvested from the hives into the drink menu at the bar.

We still cannot get over the story from the other week where the San Diego Padres allowed an exterminator to come to the field and kill of a swarm of bees when local rescuers surely would have been more than happy to take care of the problem. That is not likely to happen in Tulsa, as Hartman’s partners in the crusade are James Deming, Jay Ide, and Cheryl Ide, all local business owners with their own stake in the honey business. If you have a bee problem in Tulsa, all you need to do is call 918-981-BEES and they will come running.