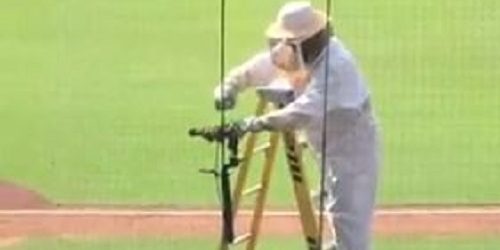 California is supposed to be the land where clean energy and nature are protected, but quite the opposite happened this week during a game. A swarm of bees decided to take up shop just outside the Padres dugout. The game was halted to deal with the situation. Unfortunately, the solution chosen by the Padres was less than humane.

You would have thought the team would have called up a local beekeeper to deal with the problem. They called someone alright… an exterminator. The man went out on the field, dressed in full gear, climbed a ladder, and proceeded to spray the swarm with poison until they were all dead. He then cleaned up the “mess” with a shop vac.

Wtf! @Padres just killed an ENTIRE SWARM of bees…why?? Bc they were inconvenient. pic.twitter.com/fzRDGaz1aZ

Needless to say, when word of this started to travel on social media, bee advocates were completely outraged. NYPD Bees, a group of beekeepers that work for the New York Police Department, were among the first to call out the Padres for the gaffe.

The group sent out to tweets calling out the Padres for killing the bees:

“This was not handled humanely. These honeybees were killed by an extermination company instead of having a beekeeper come and remove them. @MLB please have each park have a beekeeper’s number on file for instances like this.”

How Did This Happen?

Not defending the Padres, but the company is obligated to use a pest control first because they have a contract with the company as its “official pest control provider to The San Diego Padres.” However, most pest control companies these days realize the challenges of local bee populations and will work with local beekeepers to handle swarms like this. And let’s face it, a swarm of a few hundred bees would have been like hitting the lottery for a local beekeeper.

What is further adding to the outrage is the fact the swarm was obviously not aggressive. There was clearly time to call in a beekeeper to handle this situation without anyone being in danger. The game was delayed for 28 minutes, but we cannot imagine it would have taken all that much longer for a local beekeeper to arrive to handle the swarm.

Regardless, out of sheer convenience, the San Diego Padres now find themselves the target of bee advocates and will get more bad press for a team that is not exactly lighting up the standings. It would not be a surprise to see bee advocates show up and protest the team at some point in the very near future.