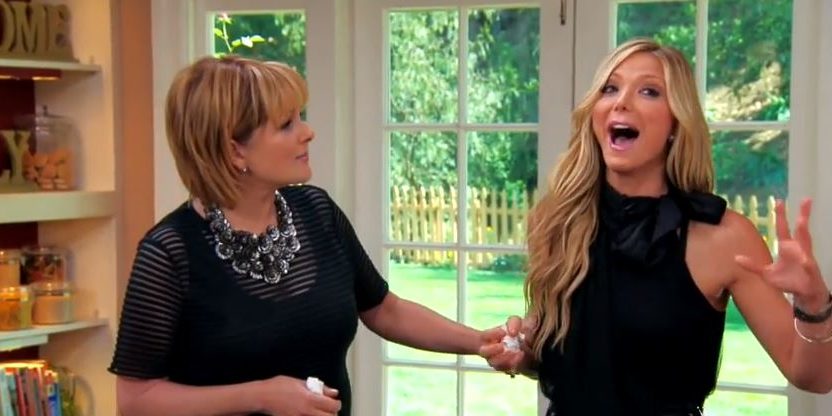 There are those who would say Debbie Matenopoulos, a staple of the Hallmark Channel, is a contemporary renaissance woman. As the host of a morning show called Home & Family, a four-time nominee for the Emmys, a bestselling cookbook writer, a spouse, and the mother of a three-year-old, Alexandra, Matenopoulos, 43, certainly has her hands full and achieves it all with grace and seeming ease. Recently, as a way showing us all how she manages to get everything done, Debbie revealed a look at her everyday schedule.

“I pack a lot into each day, but I don’t do the kind of work where I feel spent when I get home,” Matenopoulos said. “I almost feel invigorated afterwards because every single day I learn something new from the experts that come on the show.” If you’d like to see how the pros do it, here is how the beloved host balances a very active work schedule while still finding time for family and good food.

Like many with busy schedules, Matenopoulos considers herself an early bird, getting up around 5:45 am, a surprisingly later time from several years before when her daughter was younger. “I take a shower, get dressed for work, and then make myself a chamomile tea with Manuka honey. By then, my daughter will wake up, and I’ll start getting her ready. Anytime I’m in a rush, my go-to beauty product is a tinted moisturizer for a sun-kissed glow…I feel like an eyelash curler and some good mascara can really change your life.”

At 7:00, per Matenopoulos, she leaves for work 12 miles away at the studio. Once she gets to her lot, Matenopoulos makes an acai bowl with frozen fruit, avocado, and almond butter for breakfast, blending it up and adding Greek yogurt, flax seeds, chia seeds, and some coconut flakes to top it. Afterward, she heads to hair and make-up and card reads prior to the show. Around 10:15, Matenopoulos starts rehearsals for her show, sometimes bringing her daughter with her when it’s summer or the girl isn’t in preschool.

About a quarter to noon, Matenopoulos breaks for lunch, often having arugula salad topped with grilled chicken, avocado, and parmesan. “Then, I do my final fittings for the outfits I’m going to wear on the show that day. Finally, I get touched up and changed,” she said. The show goes live around 1:00 pm, with Matenopoulos saying a crucial part of her job is going with the flow of things. “We can rehearse, but once the cameras start rolling, you just have to go with it…We shoot from 1:00 to 3:00 or 3:30 depending on how long the stops are in between commercial breaks.” In addition to preparing for the next day’s shoots, Matenopoulos speaks with producers, reads books, and does research on her guests for the next day.

By 6:30, Matenopoulos has made it home for the day, with her priority being to play with Alexandra, give her a daily bath, and go through several stories before she’s put to bed. After using her Peloton bike for roughly 45 minutes, Matenopoulos showers and then reads the next day’s scripts. Somewhere in that time, Matenopoulos and her husband, Jon, have dinner, with her most recent concoctions being simple dishes, such as flank steak and broccoli or Caesar salad.

Need to order some Manuka honey so you can enjoy it every day like Debbie Matenopoulos? To get your order started, click here, and remember, we offer FREE shipping on all orders of $150 or more.