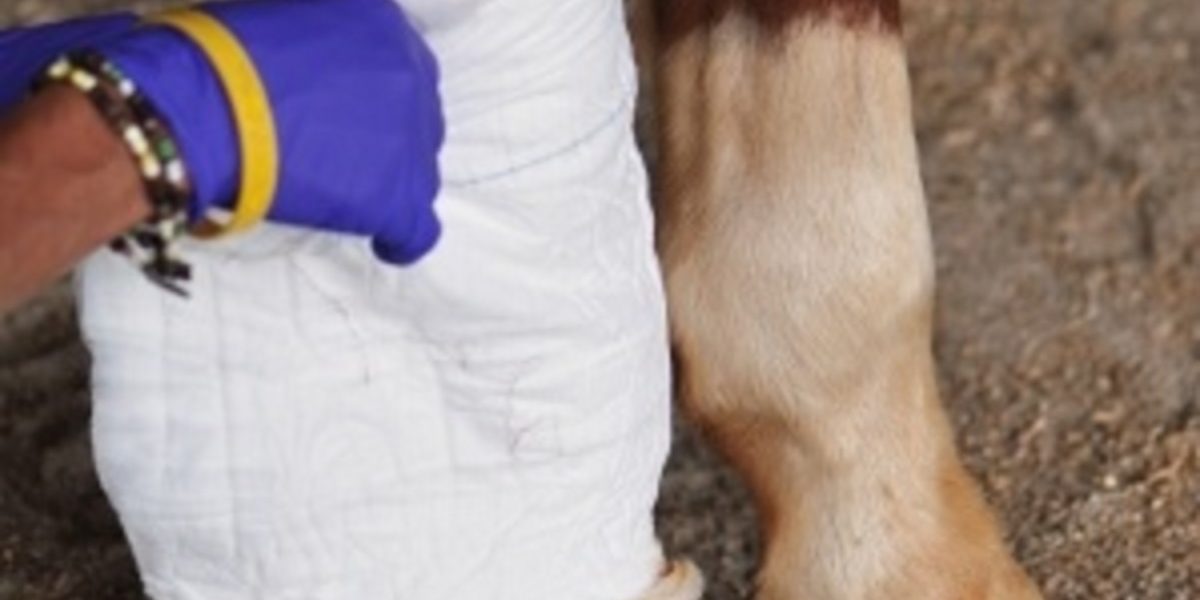 It’s a well known fact that horses can be easily startled. One ranch horse named Gunner, after being startled by a pair of bunnies, kicked into a guardrail and tore his hind leg to the bone. Gunner’s veterinarian, Andrea Arbuckle, began to look for ways to help treat the horse’s wound safely. “In the process [of kicking the guard rail], he ripped a laceration right down to the cannon bone on the right hind leg. It was so severe; there was a small fracture, significant periosteal stripping, and minor tendon damage.”

Arbuckle originally treated the wound with traditional medical products, such as tetracycline topical powder, Nitrofurazone Ointment, Betadine, and Corona Ointment. “At that point, the horse’s wound had 1 1/2  to 2 inches of bone exposed, and proud flesh was becoming exuberant around the edges,” she said. “A small-animal colleague had told me about using honey right out of the cupboard, on fight wounds on a rabbit, and it had worked really well. So, I began researching the use of honey in wound healing.”

Arbuckle began to share the idea with Sue Huck, a veterinary technician and Gunner’s owner. Huck was originally skeptical about the treatment for a horse but decided it was worth a try. Being a veterinary technician, Huck was able to acquire medical grade Manuka honey samples from Irvine, California. “We began applying the honey to the center of the wound, over the bone, and using Proudsoff Proud Flesh Ointment around the edges,” Arbuckle said. After a few days, Huck says she noticed a drastic change in the flesh.

“Within five days, the bone was completely covered and could only be felt with deep palpation,” Arbuckle said. “I couldn’t believe how quick it started filling in when we started the honey. Within two to three weeks, it went from complete bone exposure to the tissue being level with the skin surface.” Alongside traditional medications, some, like Dr. Arbuckle, have favored using medical grade Manuka honey additionally.

As long as bacteria are neutralized, animals can heal from their wounds. Bacteria can lead to inflammation and infections that postpone the healing process. However, it’s important to be aware of the pH balance of any products used to treat a wound. Bacteria thrives and multiplies between the 6.0 to 7.8 pH range. Chad Muhr, the director of marketing for Links Medical Product Inc., claims that Manuka honey’s pH ranges from 3.2 to 4.5. Changing bandages, with or without Manuka honey, often helps for sound recoveries.