How Are Honey Bees Able to Survive the Winter? 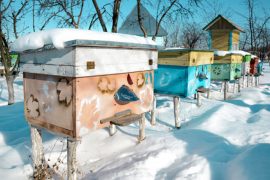 Weather is and always has been one of the more significant challenges for the honey bee. For commercial honey bee owners, they will usually see at least 10 percent of their managed hives die off during the winter. In recent years, those numbers have climbed to an average of between 30 and 40 percent, with some hives seeing rates as high as 70 to 90 percent. With just devastating numbers, just how are some hives able to thrive better than others during these colder months?

Daris Wills, the owner of Wills Beekeeping & Homebrewing recently tried to explain just how bees go about generating enough warmth to survive over the course of the winter. He stated, “The bees…what they typically do is work all summer long and work up into part of the fall to do nothing but store honey. They form a large cluster and they’re vibrating. As they vibrate, they build temperatures up close to 50 degrees on the outside and a scorching 90 degrees in the inside that which takes a lot of energy.”

Two of the key factors in their ability to survive based on what Wills is saying would be the construction and insulation of the hive as well as the food available for the honey bees during the winter since they are not producing honey during these critical months. As far as food goes, Wills stated, “Typically, I use a dry feed like a sugar patty or sugar cake for the bees in the winter.” Other beekeepers have stated they use a simple syrup concoction, but there are varying opinions as to what works best and what is beneficial or harmful to the bees on this front.

The easy solution would be to not harvest honey that late in the season, but we all know that is really not an option for commercial beekeepers. Operations would be cutting back significantly on their profits. Additionally, the honey, at least to the beekeepers, is probably more expensive to lose in terms of replacing bees that are lost over the course of the winter.

As far as the warmth factor goes, there are now studies showing commercial hives are part of the problem when it comes to the survival of bees. Commercial hives are built as towers with limited opening space at the bottom of the hive. Additionally, they are usually made from plyboard or some other very thin material. Point being, they do not compare at all to the construction of a wild hive. To offset some of the construction issues, beekeepers can cover their hives, but they are still far less insulated than a natural hive, which is why, generally speaking, wild hives have a far superior survival rate in the winter (not to mention they get to keep all their honey to feed off during the winter).

One of the more amusing lines Wills stated during his interview was in how bees go to the bathroom during the winter. He stated, “The bees are kinda coming out and flying all over you can see brown spots on the snow and they’re using the restroom and they’re called cleansing flights.” So, just like humans, when you gotta go, you gotta go!