How to Care for a Pet Skunk 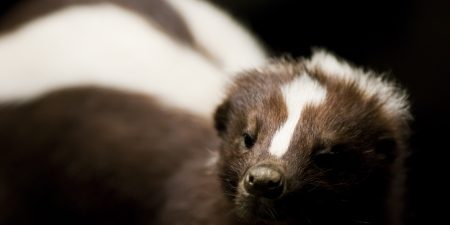 When it comes to raising a pet skunk, potential owners would be wise to do their homework first. Learning recommendations for their diet, any vaccines they need, as well as their general behavior is required to successfully own and care for a pet skunk. It’s also important to note that vets who are familiar with skunk care aren’t so easy to come by, with some U.S. states even banning people from owning skunks. However, if potential skunk owners cover their bases before attempting to buy and care for this fairly exotic pet, they often find themselves, along with double takes from their neighbors, with a loving, rewarding companion.

While it may be surprising, skunks have several different color patterns because of crossbreeding between species, ranging from classic black/white patterns to lesser-known spotted lavender/white patterns. Striped skunks can weigh up to 14 pounds whereas the much smaller spotted skunks weigh between one and three pounds. As well, skunks breed in spring, producing, on average, five or six blind kits, which are typically ready to be adopted by mid-summer. Pet owners can expect skunks to live between six and ten years in captivity, with heart disease, metabolic bone disease, and obesity being common diseases.

Many U.S. states allow citizens to own domesticated skunks, as will Canada, Germany, the U.K., Italy, and the Netherlands. Americans should check with their state before buying a skunk, and they must never grab random skunks from the wild to keep as pets, as this is illegal and could expose people or pets to rabies or parasites. Instead, search for reputable skunk rescues or breeders.

Speaking of rabies, it’s crucial that pet owners acquire their skunk from licensed breeders to ensure the animal hasn’t been exposed to rabies, which, unfortunately, can only be tested for in skunks when the animal is dead. Also, exotics vets have been known to vaccinate pet skunks with a feline or canine rabies vaccine, but the vaccine’s effectiveness isn’t known, and states don’t acknowledge it as a preventive measure. There are distemper vaccines available, but they aren’t approved specifically for skunks, so pet owners should be cautious about the brand they use, especially since there have been reported adverse effects.

As soon as skunks are sexually mature, maybe younger, they should be fixed immediately, usually around four or six months. Descenting, on the other hand, is usually done when kits are still with their original breeder. Few vets are able or willing to descent skunks, so most pet owners usually have to travel out of state for the procedure as well as for neutering or spaying. For pet owners with one or more male skunks, be careful how long you wait to neuter, as there’s always the possibility of fights breaking—it never hurts to have some Manuka honey on hand in case any territorial fights ensue.

Wild skunks, as omnivores, eat anything available, with their diets changing seasonally, and they also can’t eat much in the way of​ processed food. Low-fat diets are also essential due to skunks’ high obesity risk. There are some formulated, pre-packaged diets available online, with Exotic Nutrition being one potential website, which offers poultry-based pellets that can be added with vegetables and fruits—many universities and zoos use this type of diet.

Cooked vegetables along with occasional fruits, cooked poultry, and healthier foods containing grains should all be considered. Nuts, yogurt, and some dog food should be mixed in with their diet as well as foods high in both taurine and calcium supplementation. Younger kits must be fed several times per day whereas adults can make do with just morning and night feedings.