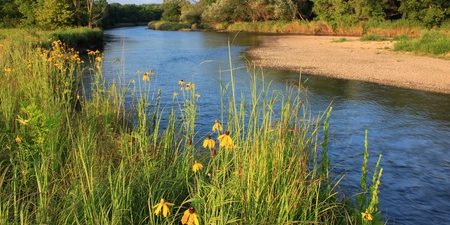 Last month on August 19, the U.S. held its ninth annual National Honey Bee Day, where honey bee and pollinator organizations around the country not only tried to build awareness of honey bees and educate the public, but they also planted new pollinator habitats at various public locations. In Naperville, Illinois, such an effort took place at the town’s North Central College, specifically on its prairie plantings, where additional bee-friendly wildflower seeds were set down on the warm summer day. “We are installing a prairie all along this walkway that is near the DuPage River,” says Brittany Drummond, North Central’s sustainability coordinator, about one of the designated areas for the college’s pollinator habitat.

According to biology professor Greg Ruthig, the college “got the prairie planting started last spring, and we’re really excited because this will be a great place to learn about prairie restoration.” Roughly 50 prairie plantings have been set down with the help of the college’s women’s soccer team. After receiving a $5,000 grant from the Bayer Bee Care Program’s Feed a Bee Initiative, the college will use these funds to buy more seeds and plants for its prairie plantings.

North Central College was among 50 locations that held special events upon receiving funding from the Feed a Bee Initiative, with some others including the Placer Land Trust’s School Park Community Garden, which is located in Auburn, California, as well as Bethpage State Park, located in Farmingdale, New York. “About a million people across the country have participated in the Feed a Bee Program and well over 100 partners,” says Jeff Donald, who is a communications director for Bayer. Donald also stated that Bayer hopes to have even more pollinator plantings in every state before the beginning of 2019.

“That’s what brings us here today – this is one of 71 programs in 34 states,” says Donald about the program’s progress. He further stated his excitement at seeing all the energy people are bringing toward pollinators and establishing native habitats for bees.

The chosen area on North Central’s campus, which will soon be filled with wildflowers and other prairie plants, can be found between a footpath, which moves along the campus’s edge and the football field, and the DuPage River, making it an ideal place to learn about conservation, botany, and bee preservation, and as well as being a generally great resource for the students and the entire community surrounding North Central College.