Is the Almond Industry Hurting the Honey Bee? 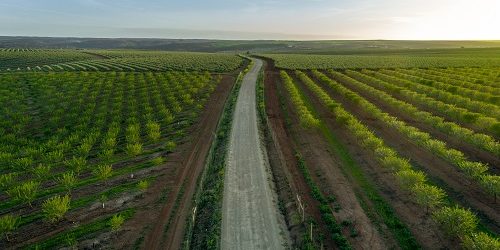 There may not be a single crop in existence that is more reliant on the honey bee than the almond. Without honey bees, almonds simply do not exist. Currently, honey bees serve as the sole pollinator for almond growers. However, the industry that relies on honey bees the most may be contributing to the slow and steady extinction of the honey bee.

This past winter was arguably the worst winter honey bees have ever seen. The loss average throughout the industry was around 40 percent, while far too many beekeepers reported losing more than 75 percent of their colonies. These numbers are well beyond the norm.

These numbers also sent the California almond industry into a panic. Because of the loss of life, growers were forced to import bees from all over the country to pollinate their almond crops. Reports stated that almond growers were even working deals out with smaller operations, literally arranging for several hundred bees from providers because of the massive demand this year.

While this is good for both the almond growers and the beekeepers, however, it is far from ideal for honey bees. Shipping the honey bees is a stressor for the bees, which in and of itself will lead to loss of life. However, the problems go far deeper than just shocking the bees from their travel schedule. These bees were being tricked into performing their duties, something that can also lead to loss of life in a hive.

For non-local honey bees, the almond season is considerably earlier than their usual pollination schedule. In addition to that, the bees need to be in place prior to the bloom, which makes the season even earlier still. In order for the bees to repopulate prior to the almond season, the bees are fed substation foods. After being shipped, they are then released into the almond fields and fed more substitute food until the bloom. Point being, the natural behavior of the bee is being dramatically changed to suit our purposes, but it is putting the bees at risk in the process.

Bee researcher Charley Nye stated, “We’ve had to bend the natural behavior of honey bees around almonds.” Nobody wants to talk about this, though, because of the financial stakes at risk. This arrangement benefits everyone financially, except, of course, the honey bee. Nye added, “As the almond acres grow, the demand for colonies seems to be outpacing the number of colonies that exist.”

The almond industry is not ignorant of these facts and is finally waking up to the fact the industry as a whole may need to revamp guidelines to ensure the honey bee survives. The industry is looking at alternative pesticides as well as considering lower stocking rates of bees per acre on almond orchards. Whether or not the industry will implement any of these changes, though, remains to be seen.