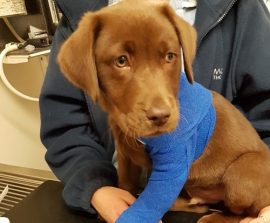 There are more than a few people that believe honey, particularly Manuka honey, can help in more ways than just a healthy diet. We have heard story after story about Manuka honey being used to heal wounds and treat minor scarring. We have actually reported several stories right here of vets or farmers using Manuka honey to heal animals, and we have another great story along those lines today.

Cooper is a Labrador puppy that is getting off to a pretty rough start. When Cooper was purchased from a breeder by Laura Hobbs, he had a nick on his leg, but the breeder assured her it was nothing to worry about. Only a few days after Laura brought Cooper home, though, he started acting fatigued and began limping around the house, not exactly what one would expect from a new puppy.

After a few days passed, the wound on Cooper’s leg opened and Laura found out Cooper had a condition called necrosis. She rushed the dog to a local Medivet facility. After the veterinary team cleaned out the wounds, they used dressings treated with Manuka honey to dress the wounds.

In addition to the Manuka honey dressings, which were changed regularly, the lead vet also used laser treatments that were meant to reduce the pain as well as prevent infection and promote the healing process. Together, the treatments worked, and Cooper appears to be making a full recovery.

Laura Hobbs stated, “When the Vet told me that they planned to treat them with honey, I was surprised but watching them improve day by day was simply amazing. I worked at home during his treatment so that I could care for him and, as a result, we’ve formed a very strong bond. Seeing him start to enjoy being a puppy again and play with his yellow Labrador ‘brother’ Herbie is just wonderful.”

The lead vet at the clinic, Pete van Dongen seemed just about as happy as Laura was to see the improvement for Cooper, stating, “Cooper’s case show [sic] that with a combination of old- fashioned and modern veterinary techniques, a dedicated owner and an enthusiastic veterinary team, anything is achievable. It helped that Cooper was such an adorable puppy.”

All we know is that we are VERY happy to hear Cooper is doing so well and if Manuka honey had something to do with his recovery, all the better!

If you would like to learn more about Manuka honey or want to place an order, please click here. And, remember, we offer FREE shipping on all orders of $150 or more.

Source and Photo via Pet Gazette