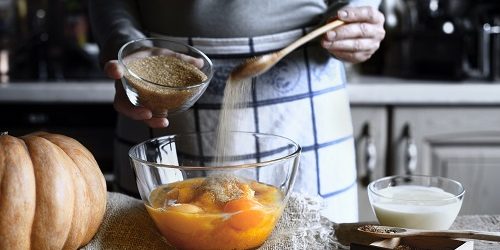 For many people, keeping their sugar intake down to a reasonable level is a daily challenge. When it gets especially out of control, your blood glucose levels go way up, insulin resistance increases, and several pounds you’d rather not have find their way to places you don’t want them—and that’s not even mentioning the long-term health effects that can be expected.

One of the healthiest ways of cutting back on sugar is resorting to both healthier and more natural sugar substitutes. Admittedly, sweet substitutes aren’t about to turn doughnuts into super foods (though we all wish they could), they do provide a few probable health benefits. If you’re curious, here are some sugar substitutes to check out!

As a natural sweetener, dates are both rich in fiber and very versatile, providing a good blast of energy whenever blended into salads, salad dressings, and smoothies. Additionally, this no-brainer of a sugar substitute may also be mixed into purees or pastes for baking.

According to renowned food bloggers, chefs, and recipe developers, coconut sugar is a favorite among natural sweeteners. Coconut sugar’s sweetening prowess and grainy texture often prove as tasty as any sugar but without blood glucose levels spiking.

When you’re baking, another effective method for cutting out sugar without facing withdrawal is substituting sugar with apple sauce in recipes. Apple sauce works especially well with healthier muffins, cakes, cookies, and cupcakes, as it helps to moisten the dessert without using oil or butter.

Given its properties for being low-carb and low-glycemic, the sweetness within monk fruit comes from mogrosides, which are natural compounds. Not only does it not have any fat, carbs, or calories, but it promotes weight loss as well. Monk fruit sweetener has also been popularly utilized for a long time by recipe developers and celebrity chefs as a natural sweetener rather than white sugar. The aftertaste monk fruit produces can come off very strong, but if it’s paired with particularly rich flavors and strong ingredients like banana, cinnamon, cocoa powder, and walnuts, monk fruit is a good choice.

Now, contrary to popular belief, a sugar substitute doesn’t need to be overly sweet. For instance, cinnamon and vanilla bean, which are raw specks out of vanilla bean pods, are other popular substitutes for the more infamous white granules of sugar.

Having been used for baking anything that’s sweet, honey, particularly Manuka honey, is all the natural sweetener you could ever need in life, especially if it hails from New Zealand and lacks any additives. You can use it during baking, stir it into some tea, or drizzle it on toast—either way, Manuka honey is perfect for anything.

Want to try some Manuka honey? To get your order started, click here. And, remember, we offer FREE shipping on all orders of $150 or more!