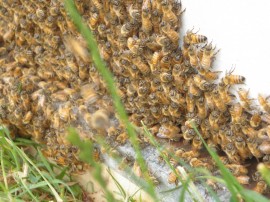 We have heard some pretty interesting stories about people finding hives in their home but we have yet to see one this massive that was holding this much honey. Nicholas Sarro, the homeowner, recently found out he and his wife are sharing their home with about 120,000 bees living in a 7.5-foot hive, which is estimated to be holding more than 70 pounds of honey!

In September, the Long Island couple noticed some bees around their chimney. They decided to call Anthony “Tony Bees” Planakis. Planakis is a former NYPD beekeeper who came to fame several months ago when a profile was done on the special unit within the NYPD. Planakis came out to investigate and what he found was pretty amazing.

Planakis used an infrared camera to look inside the wall of the home without actually breaking through the wall. The heat signature on the camera showed a hive that was bigger than the average man, extending more than seven feet inside the wall. Planakis stated, “I felt like I hit the mother load. It was like the Normandy invasion.” When Sarros saw the hive, Planakis stated, “His eyes nearly popped out of his sockets.”

The former NYPD beekeeper has been working with bees for more than four decades and this is by far the largest hive he has ever seen. According to the report in the New York Post, there has NEVER been a hive this big reported before in the entire state that was in a home. Planakis estimated the hive has been in place for years, more than likely at least seven, to achieve its size. His plan is to allow the bees to remain in place over the winter since they have already gone into hibernation mode, then come back in the spring when they will have the spring blooms to pollinate.

According to the homeowners, even though the hive is massive, it has never caused a problem for them. They even have guests stay in the “bee room” with no problems. When Planakis returns in the spring, he will open up the wall to remove the hive, then donate the bees to local beekeepers. He estimates the cost of the removal will be upwards of $1,000 to complete. For now, though, the homeowners have a unique story to tell and even though they know they share their home with 120,000 bees, they are not worried at all. Sarro stated, “I’d be more worried if they were roaches!”