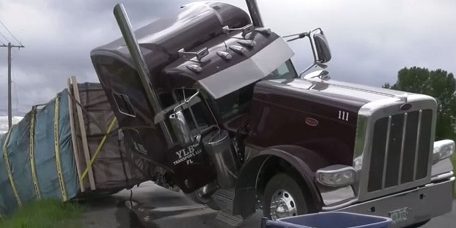 With all of the problems beekeepers are having in keeping their colonies alive, the last thing we needed to see was an accident killing tens of millions of bees. That was the exact scenario, however, as roughly 133 million bees were aboard a truck transporting the bees from California to North Dakota that crashed on Monday. Somehow, though, only a very small portion of the cargo was lost and the driver and passenger in the truck walked away without injury.

The semi had picked up its load in California and was passing through Montana when the accident occurred. The driver was trying to make a turn when the tractor portion of the truck tipped and went into a ditch. Thankfully, only about a pound of bees were lost in the accident, which equates to no more than 3,000 bees.

While those bees met their demise, footage of the accident showed tens of thousands of bees flying around the truck. Emergency workers had to first secure the area to treat the fuel that was leaking from the truck. Local first responders were wary of the bees, so many of them were in their full gear, including breathing apparatus, to avoid being stung by the bees. Unlike what the San Diego Padres did last week when a swarm arrived, however, the first responders called on local beekeepers to help them with the situation.

Assistant Fire Chief Brian Nickolay stated, “We had to do some stabilization to the truck since it is on its side and it was leaking fuel. We just took the best precautions we could as far as safety for our guys. We went really in our full structure fire gear, including our self-contained breathing apparatus packs so kind of minimize and reduce the risk of being stung at that point to our guys.”

The local beekeepers did their jobs, eventually rounding up most of the haul and getting them back into the holding bins in the trailer. Officials held the truck to ensure it was okay, then the driver and the vehicle were released to continue the journey to North Dakota, were the honey bees will find their new home.

While the honey these bees will eventually harvest will surely be delicious, it does not compare to the raw Manuka honey from ManukaHoneyUSA.com. Our honey has a rich taste, almost caramel-like, that is unlike anything else on the market. To learn more about our Manuka honey as well as our other raw honey products, please click here. Remember, we also offer FREE shipping on all orders of $150 or more!