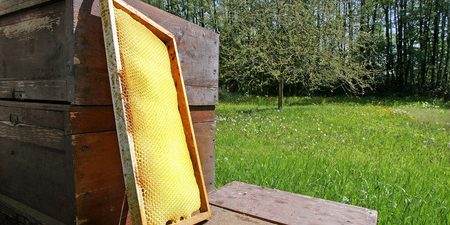 Due to the increased awareness of the struggles on honeybee populations around the world, ordinary people and even businesses are chipping in to help the tiny pollinators get back to some form of former glory. Some people throw fundraisers, call beekeepers when they discover nearby swarms rather than exterminators, and some businesses even host bee colonies right on their roofs. Big name hotels and even a Paris opera house have provided a safe place for beekeepers to raise their bees. Now, the Marriott Cornhusker Hotel in Lincoln, Nebraska has join those ranks by starting a honey operation where beekeepers Warren and Trey Nelson care for the hives.

Toward the end of May of this year, Warren and Trey, who are father and son, lifted four large hive boxes full of bees up to the Marriott’s rooftop. The total number of bees started off at about 40,000 Italian honeybees (or 12 pounds), including four queen bees the Nelsons ordered in April from a California supplier at the hotel’s request. The hope is that bees will breed and grow to the point of the hotel homing around 240,000 honey-making bees.

The Marriott originally contacted the Nelsons’ operation, Valhalla Bee Farm, back in October about helping it bring bees onto its campus. The hotel claimed it had become inspired after hosting artist-in-residence Margaret Berry, who created several paintings with pigment, beeswax, and resin. “It inspired us to look into having bees on the roof and to use the honey,” said Susan Madsen said, who serves as the Marriott’s general manager.

Warren Nelson cared for the honeybees at the bee farm for several weeks and fed sugar water to each colony of bees, hoping to get the bees to multiply to 100,000 before both beekeepers took them up to the hotel’s rooftop. According to Warren, he had never before been hired to take care of bees for another company. “This is a first for us,” Warren said. “It’s a new concept.” With the arrangement set up, the Marriott says its hopes are to harvest around 600 pounds of this honey annually, which will be sold in the hotel gift shop as well as used by the main chef and the pastry chef. Both chefs are currently coming up with ideas for incorporating the honey into the menu.

Ms. Madsen also said the honey sales will be as close as the hotel guests get to the hotel’s roof bees. “They don’t have to be worried about getting a bee sting,” she said. “The bees are just doing their job.”