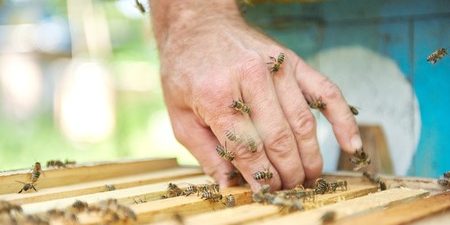 As word spreads about the decline of honeybees and the ways in which ordinary folks like us can help, more stories keep popping up that indicate just how powerful communities can be when they come together for one purpose. This story, which comes out of Jamestown, North Dakota, revolves around two groups of people who are typically at odds with each other when it comes to their livelihoods – beekeepers and farmers. In the past year, a new project has started with the aim of moving past the blame game between farmers and beekeepers and toward addressing declining honeybee populations, getting them working with scientists and trying to reverse the debilitating trend.

According to project developer Zac Browning, who is also a fourth-generation beekeeper, “It’s an effort to help everybody realize that it is a complex issue and that solving one of the issues that causes stress for bees is not going to solve all of the problems.” Among the problems bees have faced in recent decades are parasites, diseases, and losing foraging habitats, which have regularly led to tensions between the agriculture and beekeeping industries regarding where to lay blame for beehive losses, leading to simplistic, unsuccessful fixes, says Browning.

“Seems like a no brainer: plant flowers, but it’s not that simple,” Browning continued. “Trying to improve the habitat, it takes good science. Bees need diverse, plentiful nutrition throughout the entire foraging season.” Browning’s business, which has operations in Idaho as well as North Dakota, has roughly 30,000 bee hives in total – and it is currently harvesting season. “You can see the honey dripping all over the place. The workers are wearing gloves and aprons, and they’re still sticky. It’s a messy process.”

Many beekeepers report seeing lower honey production in addition to increased costs while trying to keep their bees alive, despite all the factors working against them. That’s why this new project in North Dakota is so innovative—they are bringing the best, newest technology to one place to demonstrate whether “the needle for bee health” can be moved, per Browning. With North Dakota being the number one honey-producing U.S. state, where roughly 500,000 bee hives are brought every summer, it’s a good spot for testing the collaboration, especially since it’s also lost plenty of habitat to soybeans and corn.

The project involves scientists from the U.S. Geological Survey as well as large insecticide companies like Bayer and Syngenta, with the latter showing the importance of everyone communicating to bring about solutions. In just their first year, project developers have seen the differences when farmers are invested in honeybee survival and plant bee habitats. “They call when they have to make any kind of a decision,” Browning said. “‘I’ve got a pest problem, I need to spray. What should I use? Is that going to affect your bees?’ That only happens when you have good communication and a relationship.”