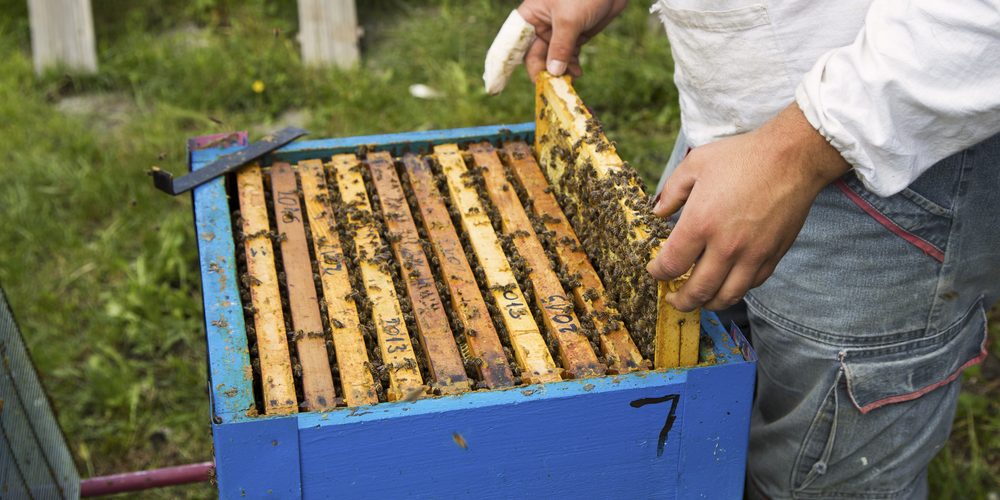 When people live and breathe a specific subject most days of their week, and especially for their job, it’s not surprising when they go the extra mile to inspire some of that same dedication in others. For Amanda Roe, who is an entomologist and assistant biology professor for Omaha, NE’s College of St. Mary, her subject is life – and bees. This past month, Roe had the fortune of acquiring hive boxes and thousands of bees to start a brand-new colony on her campus. Her intention is to spread awareness about all bee species—honeybees and native, solitary bees alike—and show her community that bees are nothing to be afraid of.

“Bees only sting when they feel threatened,” Roe said. “So, let them fly around. Be calm. Be cool. Send them lots of love.” During a rainy April weekday in Omaha, Roe brought her two kids and a couple thousand honeybees to a gathering of about ten people on campus. Wearing an apiarist’s veil and gloves, Roe and her research assistant, Mirtha Gutierrez, set up the boxes that would become St. Mary’s bee hive.

Gutierrez’s younger sister, Amelia, who was present with their mother and father, exclaimed when a bee “got free.” Roe told the young girl that it was all right – before long, all the bees would be free to fly as they wish. Roe, 32, wishes to see more people learn an appreciation for honey bees and wild bees, with the latter being her more pressing concern considering honey bees can at least be raised up and their numbers bolstered.

Bee hives are such complicated, fascinating communities, Roe says, which is why she was especially gladdened when Sister Maryanne Stevens, St. Mary’s president, approved of the hive being placed on campus grounds. “I think it’s really kind of cool,” Stevens said. If any students were fearful of bees, Stevens suggested they simply steer clear of the bee colony. “They’re not going to go after you,” Stevens said. “They’re too busy doing their own work.”

Roe’s three-pound bee boxes contained about 5,000 worker bees and one queen bee. Before her small crowd, she set up frames within the hive boxes, which would soon be filled with honeycombs and the hive’s winter food supply. By Roe’s estimates, the bees would soon bond with their queen and grow into a fully functional colony. While the queen bee lays thousands of her eggs, the workers will feed her, store honey, clean their hive, and complete other tasks. “There’s our beehive,” Roe said to conclude her presentation – during which no one was stung.