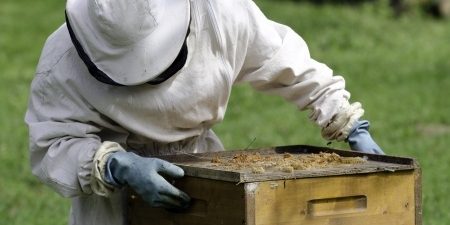 After multiple years of only bad news, the United States’ Department of Agriculture recently released a new report on honeybee colonies with some positive numbers. As of April 1, 2017, U.S. commercial honeybee colonies numbered 2.89 million, which is a three percent growth from the previous year. Even better, the number of colonies lost has also dropped from the year before, with those lost between April and June 2017 being 226,000 (eight percent), down from 330,000 lost (12 percent) during the same time in 2016. While these are small victories, and honeybees still have a long way to go, this is a solid indicator of honeybee populations beginning to stabilize.

According to Jeff Harris, a research apiculturist with Mississippi State University Extension, “It is hard to look at the colony numbers and get a clear snapshot on overall bee health; what the numbers and charts don’t show is how much harder the beekeepers are working to keep those bees alive.” USDA research also showed varroa mites rated as 2017’s number one stressor for bee operations, despite their effects on colonies being down 11 percent from the April-June period of 2016.

Mites might be causing substantially less damage, but honeybee colonies will likely always have to deal with threats from these pests as well as other concerns. “Bee health has been devastated for the last 30 years not only because the varroa mite was introduced, but because other diseases and pests were introduced…Beekeepers must continually manage these diseases and pests to keep bees healthy,” says Harris.

To help address the challenges of both pests and diseases, agricultural companies like Bayer CropScience are performing research on honeybee health while also working to develop technologies to help beekeepers in their daily operations. The relationships between beekeepers and manufacturers are essential for keeping communications open and transparent—that way they can both work together toward addressing issues impacting honeybees. “We are making steady progress in our collective efforts to improve honeybee health. However, there remains much work to do to achieve a truly sustainable bee industry,” Dick Rogers, a beekeeper and principal scientist for Bayer’s North American Bee Care Program, said.

Rogers continued, “Beekeeping has never been easy, but the introduction of [the varroa mite] has forever changed the rules of the game, forcing beekeepers to cope with this formidable foe or face the loss of their livelihood altogether.” In order to combat such issues, companies like Bayer have created numerous platforms for aiding research into new products in addition to planting forages for honey bees—hopefully, per Bayer, in every U.S. state by the end of 2018.